Whether or not you were alive for the dawning of the Jet Age, you’ll recognize its soaring architecture, mod shapes, and saturated primary hues—hallmarks of a dazzling new era of exploration. And one of the best symbols of this inspiring age of design was the Eero Saarinen–designed TWA Flight Center, opened in 1962 at John F. Kennedy International Airport (then called Idlewild Airport). Its swooping, curvilinear cement “gull wings,” futuristic curved walls of windows, tube-shaped corridors, and flowing, doorless interior captured an American moment—right until TWA closed and was absorbed by American Airlines in 2001. After years of lying dormant, the landmark flight center reopened in May as the TWA Hotel, and my husband, Ed, and I took a sneak peek.

As midcentury-modern-design fans who designed and built our home in the Hudson Valley according to modernist precepts—and furnished it with, among other pieces, a Saarinen walnut tulip dining table and chairs that we bought from its original owners—we jumped at the chance to stay in the building that we have admired for decades in the first week that it was open as a hotel. It was overwhelming, like being inside a sculpture.

We began our stay with a “Come Fly with Me” cocktail at the restored-to-perfection Sunken Lounge in the center of the terminal under a split-flap, clicking departures board. The rich reds, the curvy furniture, the nostalgic menus, coasters, and swinging ’60s music—even the retro TWA destination swizzle sticks—transported us to a time when flying was pure glamour.

We had dinner at Paris Café, the Jean-Georges Vongerichten restaurant on the mezzanine, which we loved for its subtle mix of sunny and subdued colors and proximity to the glass-curtain walls that tilt toward the interior, with views of the control tower. We ended our first night with a visit to Connie, a 1958 Lockheed Constellation that has been transformed into a cocktail lounge. We walked out of the hotel along a path created by sunken lights and up stairs that say “Up, up and away with TWA,” and took in the view of the glowing Sunken Lounge from the outside. Inside Connie, we sat in vintage airplane chairs for a cocktail. It has a great vibe and would be perfect to rent for a party.

We stayed in the Saarinen wing (opposite the Howard Hughes wing), which has a fabulous view of the iconic terminal and the runways. I loved design elements like Knoll furnishings (Saarinen’s own Womb Chairs) and sleek walnut, terrazzo, and brass fittings. Every detail—the penny tiles, the branding font—connected us to the Saarinen building. Seven panes of glass kept our airport stay noise-free, and fun extras (look for Tab in the cocktail bar) reinforced the stylish throwback feeling.

In the morning, we wandered the whole hotel, looking at all the vintage uniforms designed by Pierre Balmain, Valentino, and Oleg Cassini; vintage travel posters; a great exhibit on the making of the building; and a Noguchi fountain with Eames chairs in the former Ambassador Lounge. You really need to look around every corner, since surprises are everywhere—for example, a special relaxation room just for the pope, in case he was flying TWA.

Since our visit, the rooftop pool and observation deck have opened, offering the tempting prospect of sipping a cocktail in an infinity pool that overlooks JFK’s runways—and giving me ample incentive to return for another stay at the TWA Hotel. Come winter, the pool can be heated to 100 degrees, blending the thrill of plane-spotting with the bliss of soaking in a “pool-cuzzi.” What could be more chic? It’s enough to make you long for a layover. 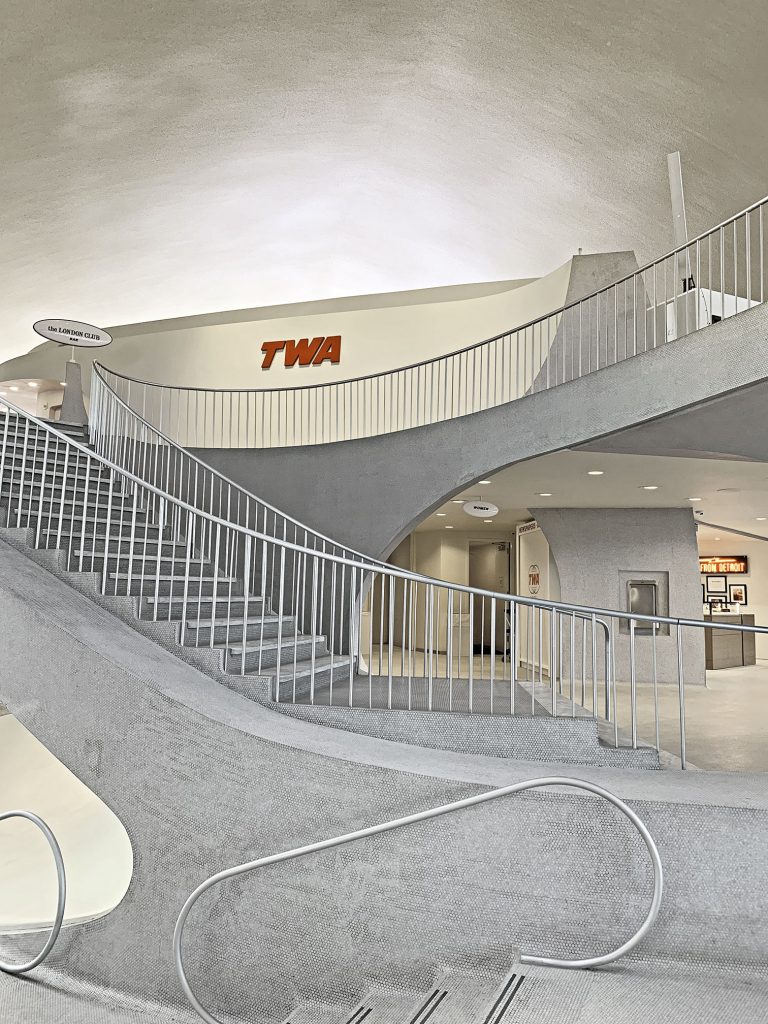