In 2020, we may have seen a temporary exodus from cities during the initial round of Covid-19 lockdowns, but as we are seeing with increased activity already, it was just that – temporary.

As part of the 15th Edition of The Wealth Report – produced by Douglas Elliman and Knight Frank Residential – 100 cities across the globe were analyzed for our City Wealth Index to determine where the wealthy are parking their money. 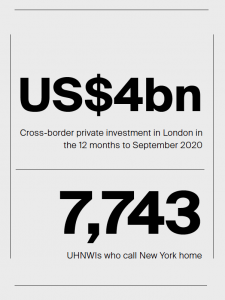 There are numerous reasons, in terms of their wealth, investment and lifestyle oﬀerings, why Ultra High Net Worth Individuals (UHNWIs, net worth in excess of $30 million) are still choosing to spend time in urban areas.

For the first time in 15 years of data collection, London and New York cannot be separated, sitting together at the top of the index. Asian cities are led by Tokyo in fourth and Hong Kong in ﬁfth place. European cities are the overall leaders this year, claiming eight of the top 20 spots, largely driven by high rankings for investment and lifestyle. North American cities occupy seven of the slots and Asian cities ﬁve.

“There are numerous reasons High Net Worth Individuals are still choosing to spend time in urban areas.”

In the wealth category, which measures the number of high net worth individuals in a city, the US clearly dominates. In terms of UHNWIs New York leads, with 7,743 individuals. Look at the number of HNWIs ($1 million+ in assets) however, and it is London that leads with 874,354 millionaires – creating a tie. 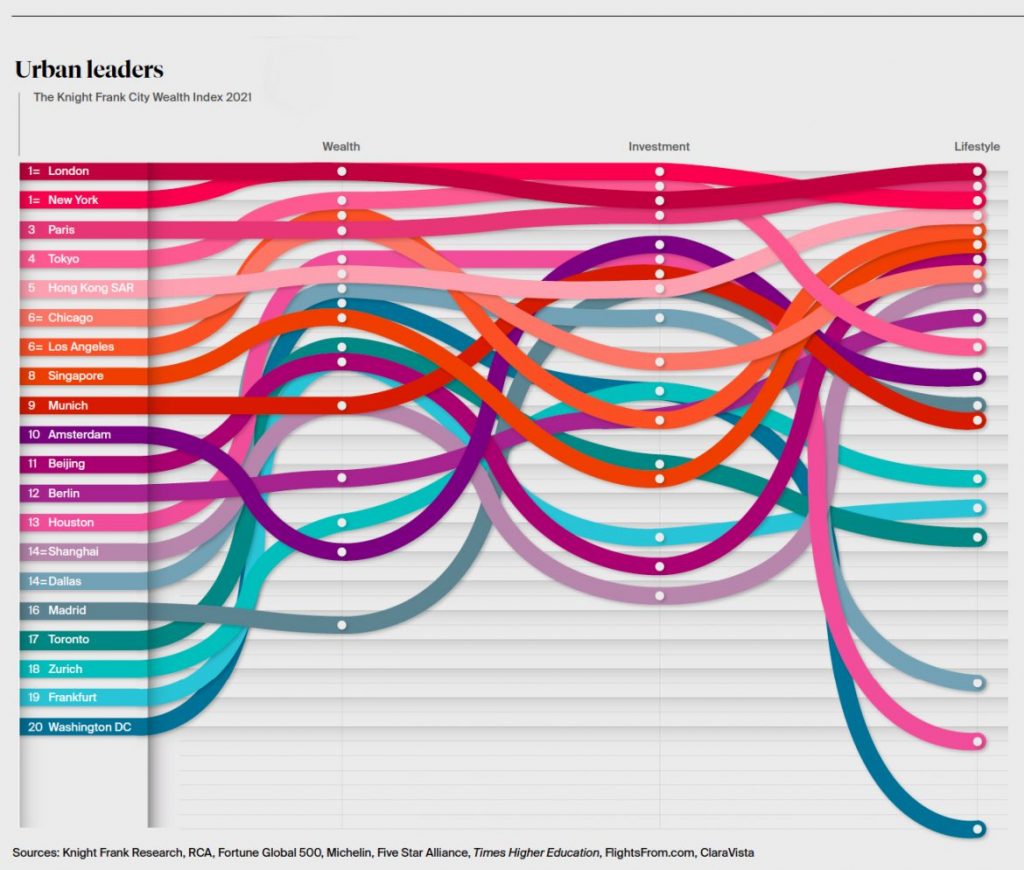 New York led the investment category due to the high number of top global ﬁrms headquartered there as well as strong  domestic investment. It was London, though, that saw the highest levels of cross-border capital from the widest range of different countries invested in real estate over the  12 months to September 2020. Paris, Amsterdam, Munich and Madrid all ranked within the top ten. Amsterdam ranked joint second highest for diversity of investors and seventh for cross-border investment.

For lifestyle, while London still led, Paris was hot on its heels. This year, in addition to our usual measures of top universities, Michelin-starred restaurants, ﬁve-star hotels and airline connectivity, we have added the number of high-end retail outlets for selected brands using data provided by marketing agency ClaraVista. For this new measure,  Paris was in second place after Hong Kong. Sydney, Australasia’s strongest performer, ranked third highest for top universities, but scored less well for connectivity with fewer ﬂight destinations.

Discover more in The Wealth Report.