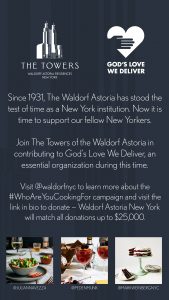 Those who don’t have the ability to shop or cook are more vulnerable than ever during this time, as many meal providing services have had fewer staff members or can no longer operate due to closures.

God’s Love We Deliver (GLWD), a non-sectarian organization that delivers food to people with underlying medical conditions, is still operating strong, and is seeing an increase in the amount of applicants in need as a result of the pandemic. Those who have trouble cooking for themselves have been consistently supported through GLWD before the pandemic—now more than ever, it is crucial that the organization continues to provide this service to those in need.

The Waldorf Astoria has been an icon of New York City since the original Waldorf and Astoria hotels were joined together in the late 1800s on the site of the current Empire State Building.

When the new Waldorf Astoria New York opened in 1931 on Park Avenue, it was the largest and tallest hotel in the world, home to Hollywood’s elite, host to countless world leaders and the site of cultural events and galas that hold a special place in the hearts of both New Yorkers and visitors from around the world.

Some of New York’s most famous recipes were also created, or rumored to have been created, at the Waldorf, including the namesake Waldorf Salad, Red Velvet Cake, Eggs Benedict and Thousand Island Dressing.

If you’d like to participate in the #WhoAreYouCookingFor challenge, just take a photo of a meal you’ve prepared at home, tag friends and family with whom you’d like to share that meal and donate the cost of preparing the meal to GLWD. Tag @godslovenyc, @waldorfnyc, and use #WhoAreYouCookingFor to spread awareness. Participants have made everything from red velvet cake to the classic Waldorf salad—whatever you decide to cook, invite others to join the challenge.