Maple trees sense spring before the rest of us. In February, snow may lie deep on the ground and the nighttime temperatures may plunge below freezing, but as soon as the thermometer starts to rise above 32 degrees during the day, sugar maples awaken. They draw moisture from the softening ground and convert starch stored last season into sugar to feed new growth.

Growing up in New England, hearing the drip-drip as icicles started to thaw and noticing slush melting into mud meant a visit to a sugar shack wasn’t far behind for me. Hot boiled syrup poured onto freshly fallen snow results in a sticky toffee-like treat that I craved every year, and farms set out folding tables and chairs in the wintery sunlight for pancake breakfasts to celebrate the first true harvest of the season.

At Mueller Preserve in Greenwich, Connecticut, about a dozen maples are tapped annually, giving  visitors the opportunity to see how syrup is made step by step, from trees to treats.

“It’s a great seasonal outdoor event and a wonderful New England tradition,” says Will Kies, executive director of the Greenwich Land Trust, which manages Mueller Preserve as part of the more than 750 acres the organization protects.

Sap is the first step. It’s collected by drilling a tap into a tree. The tap works like a spigot, dripping some of the sap into a connected bucket or, in larger, more modern operations, into a plastic tube leading to a collection tank. The sap looks pretty much like water—and tastes pretty much like water, with a very slight sweetness.

“The fact that sap coming out of the tree is perfectly clear shocks people,” says Kyle Jacoby, educator at Appleton Farms in Ipswich, Massachusetts, which offers a variety of maple sugar programs in-season. “They think it comes out brown and almost maple syrup.”

In reality, it takes 40 gallons of sap to make just one gallon of syrup. That’s a lot of boiling off, as my family learned firsthand when I was in grade school. We tapped the big old maple in our backyard, collected the sap, and started boiling. And boiling. And boiling. We wound up with about a cup of dark rich syrup—and steamed some of the wallpaper off the kitchen walls in the process.

As my parents learned the hard way, the work of concentrating that liquid down is best done in a sugarhouse—a separate structure that gets a workout only in February and March, boiling day and night during the season to produce that magic elixir. Commercial producers may use gas to heat their evaporators, although traditionally sugarhouses are heated with wood.

Because boiling takes so long and is so cozy, Jacoby says sugarhouses have likely been a draw for hundreds of years. “It’s such an enjoyable place to be,” he says. “It smells good, and it’s the last thing before spring happens. So it’s either a celebration of the winter that passed or the spring to come.” 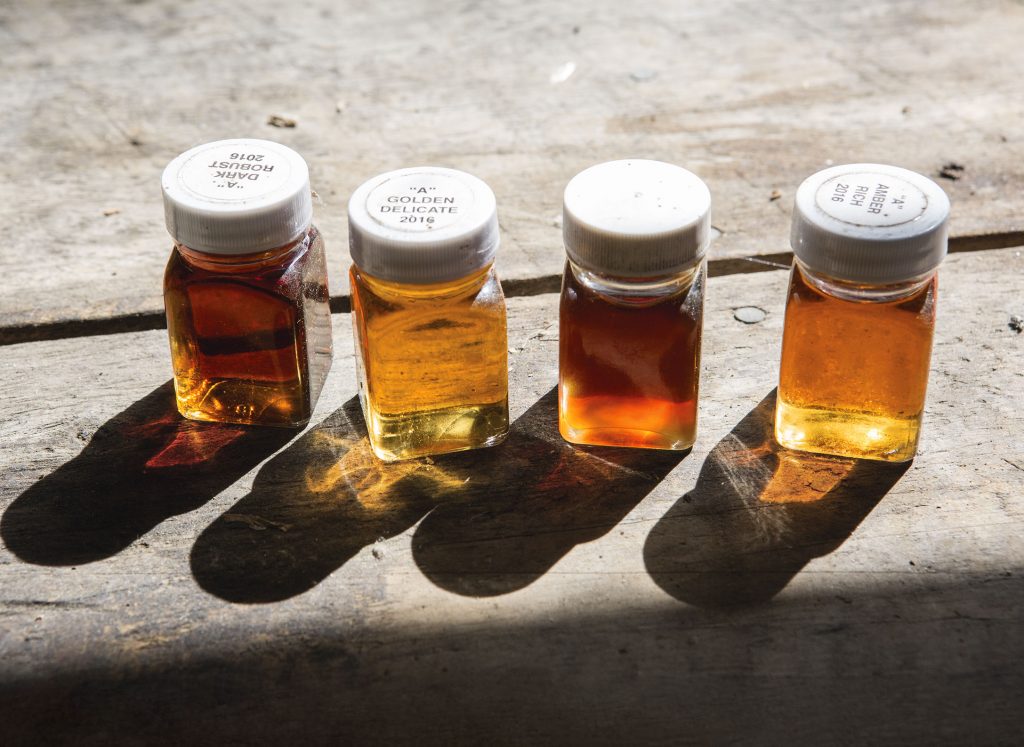 Want to taste sap, tap a tree, or enjoy a pancake breakfast? Maple sugar season is weather-dependent, generally happening in the Northeast in February or March. Try these places for a taste.

Manor Farm: Discover how to identify a maple tree in the winter, explore the history of maple sugaring, taste and collect sap, and watch staff boil it down at this historic animal farm. Programs for adults, families, and children are offered March 21, 22, 28, and 29. 210 Manor Rd., Huntington, NY, 631.213.1927, starflowerexperiences.org

Appleton Farms: Here you’ll find wood-fired, small-batch syrup, and everything from classes on cooking with maple to sugaring tours and maple-themed crafts for kids. Route 1A, Hamilton and Ipswich, MA, 978.356.5728, thetrustees.org

Greenwich Land Trust: The annual Maple Sugar Day, usually in February, offers activities for the whole family, from a history of the sweet stuff to instructions on making your own. 370 Round Hill Rd., Greenwich, CT, 203.629.2151, gltrust.org

Lamothe’s Sugar House: Tours are offered from mid-February to the end of March, Saturdays and Sundays, explaining the process from tapping to tasting. Big groups should call ahead. 89 Stone Rd., Burlington, CT, 860.675.5043, lamothesugarhouse.com

Find your next home in the Northeast today.