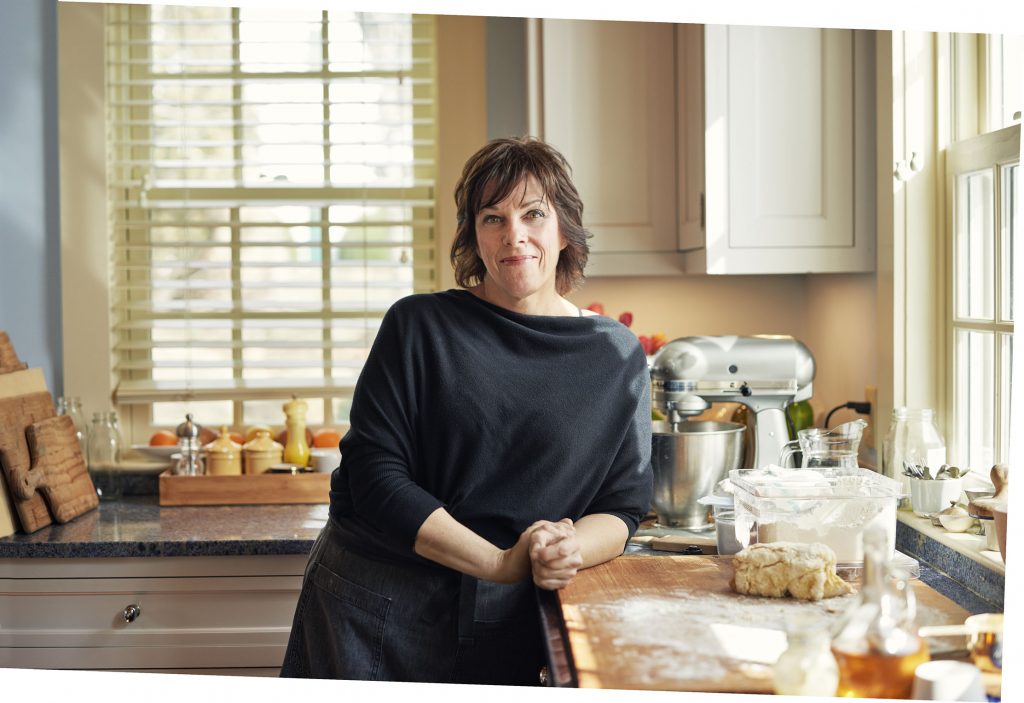 Not everyone gives that much thought to kitchen appliances, but Barbara Lynch loves her fridge. The Boston restaurateur says her Samsung Showcase Side-by-Side makes cooking easy and organized. And that’s important. Despite a lifetime in the kitchen, and running seven successful Boston restaurants with a staff of more than 200, Lynch still finds cooking and entertaining at home relaxing. Built-in floor-to-ceiling shelving (with a ladder to reach the top) opposite the kitchen in her South Boston apartment holds glassware, serving platters, tablecloths, napkins, and extra utensils, “so I never have to worry about having enough table settings,” Lynch says.

Combine that with an open kitchen, a long dining table, and big couches, and Lynch can whip up a meal while chatting with guests when hosting a dinner party.

The apartment, close to Fort Point, where Lynch has three restaurants, has another attribute supporting a different interest. “All of the natural light, coupled with the high ceilings, makes my apartment the perfect space to paint—my favorite creative outlet outside cooking—and to display my art,” Lynch says. The chef, who spent two weeks as artist-in-residence at the Isabella Stewart Gardner Museum, enjoys sculpting people she has met, as well as creating bright, colorful paintings.

It seems a world away from where she grew up—in a gritty housing project run by crime boss Whitey Bolger—but it’s only a mile. Close enough that Lynch, who shared her story in the memoir Out of Line: A Life of Playing with Fire, can meet childhood friends for steak tips at the Shamrock Pub & Grille at the corner of East 8th Street and H Street in Southie. “It feels like home,” she says. “I love being just around the corner from where I grew up.”

Last year, Lynch celebrated the 20th anniversary of the first restaurant in her Boston empire—the acclaimed No. 9 Park. Her most luxe restaurant, Menton, earned four stars from the Boston Globe. And the accolades keep coming: Lynch was named to Time magazine’s annual list of the world’s most influential people in 2017. She was also the second woman ever named “Outstanding Restaurateur” by the James Beard Foundation. With such a full professional life, what Lynch looks forward to most at home is her kitchen—and her cozy bed. “I really feel like I’ve returned when I can make a healthy meal for myself and get a good night’s sleep,” she says.