Next month, Barbara Mattson will celebrate her 25th anniversary with Douglas Elliman. In 1997, when Prudential Long Island Realty had yet to become part of the Elliman family, Mattson helped Dottie Herman to open the company’s first office in the Hamptons.

“I seem to remember that my start date was either November 7th or the 9th,” she said. “Can you believe it? I’ve been with the company that long!”

But 2022 also marks the anniversary of the pivotal moment in Mattson’s life that first brought her to the Hamptons in 1992. That summer, after surviving 12 years in an abusive marriage, she became one of the first residents of The Retreat, a pioneering domestic violence shelter in East Hampton.

The longer, more harrowing version, however, is among the stories of survival and strength featured in a new documentary about The Retreat on the dual occasion of the shelter’s 30th anniversary and Domestic Violence Awareness Month. Directed by filmmaker Markie Hancock, The Power of Community: How One Town Stood Against Domestic Violence is screening October 13 as part of the Hamptons International Film Festival, which also is celebrating its 30th anniversary.

When she first learned about The Retreat in the spring of 1992, when her brother had heard about a Montauk benefit performance that singer-songwriter Paul Simon had given to benefit the just-opened shelter, Mattson had finally summoned the courage to seek help. Having secured a pro bono attorney and an Order of Protection, she and her son waited until her ex-husband left for work and escaped their Staten Island home with the help of her family.

“My brothers, who were waiting around the corner, came and got us, and we headed to Long Island,” Mattson recalled. After a night in the Jamesport Motel, she contacted The Retreat, which arranged for another night of emergency housing before providing her with directions to a safe house in a secret location. 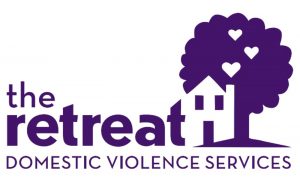 Mattson and her son spent the entire summer of 1992 in the shelter. “It was incredible—so supportive and uplifting, like being wrapped in a cocoon of safety,” she said. “It was a turning point in my life. Not only did The Retreat save my life and the life of my son, it also enabled me to rebuild our lives and start over.”

Starting over meant working as a checker in a local supermarket for a few months, then on the estates of Ron Pearlman, at The Creeks, and Calvin Klein, on West End Road, in East Hampton. She even volunteered for the very first Hamptons International Film Festival. Years later, while working at Prudential Securities in Southampton, Mattson met Mary Ellen Kay, who in turn introduced her to Dottie Herman.

“Dottie, at the time, owned Prudential Long Island Realty, and Mary Ellen said she should expand her real estate company to the Hamptons,” Mattson recalled. “And of course, Mary Ellen had just the spot—right next to her Prudential satellite office at 3 Railroad Avenue in East Hampton.”

Mattson went on to help establish several new offices across the Hamptons, including Sag Harbor, Southampton, Quogue, Bridgehampton and Montauk. She is now Manager of the East Hampton and Bridgehampton offices.

“You cannot imagine how far we have come,” she said. “It’s truly amazing the wonderful changes that we’ve seen and the DE Family that we’ve become. I’m so proud of all of us.”

Over the years, Mattson has been generous in sharing her story and her enduring gratitude for The Retreat. She participated in a weeklong conference on domestic violence at Stone Brook University, in 2000, and has spoken frequently in public on behalf of the shelter, which honored her at its Artists Against Abuse Gala, in 2006. Most recently, she contributed her testimony to the shelter’s virtual gala this year, which featured appearances by the likes of Joy Behar, Padma Lakshmi, Don Lemon and Monica Lewinsky.

In addition to her advocacy on behalf of The Retreat, Mattson has volunteered for Maureen’s Haven homeless shelter, Most Holy Trinity in East Hampton and Bay Street Theater in Sag Harbor. And she has run the Springs Community Theater Company for the last 15 years, producing numerous plays and musicals.

Reflecting on the release of the documentary and the 30-year anniversary she shares with the shelter, Mattson marvels at the profound impact The Retreat has had on so many lives.

“What an amazing organization,” she said. “The women who work there, the employees and all the volunteers are among the most special people in the world!  Just think of the thousands of women and children whose lives they have saved as well as enabling families to rebuild their lives these past 30 years. It’s staggering.”