Among the possible problems a homeowner could have, Mina Kooklani has the least dire of them all—and she knows it. “Sometimes I have a hard time choosing where to sit, because every room has ocean views,” she says. In fact, Essencia, the home she shares with husband Mark Kooklani, which is tucked into the side of La Jolla’s Mount Soledad in what has been described as “the Hollywood Hills of La Jolla,” was built to take advantage of the lot’s astonishing 280-degree views. She often finds herself meditating from the living room, where a retractable glass wall opens onto the infinity-edge, saltwater pool. “I have the vanishing-edge pool right in front of me and where the surface blends with the ocean,” she says. “I feel like I have the Pacific Ocean right in my backyard.”

In fact, the ocean might as well be in her backyard, since it’s only a half mile away. The 9,200-square-foot home was designed by San Diego architects Concepto Design Group International to take full advantage of the curved promontory on which it sits. Popularly dubbed the “Jetsons House,” the home is all curvilinear walls and organic, sweeping lines. In fact, Kooklani notes, there are virtually no right angles in the house at all, a quality that lends the house a special kind of energy. The entire estate takes on the feeling of living in a giant arcuate sculpture. Handcrafted, copper-clad doors lead to a dramatic split-level family room and living room, as well as a kitchen whose every surface curves and bends toward its view of the ocean. From this uniquely situated aerie, “You can see everyone: downtown La Jolla, La Valencia [La Jolla’s iconic pink hotel], the beautiful landscapes of La Jolla Farms, and over to University City. But no one can see you. In fact, you could walk naked around the swimming pool and no one would ever see you,” says Kooklani. 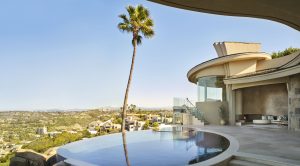 The estate’s curvaceous qualities go well beyond its perimeter. The two-level master closet, for instance, is surrounded by glossy, built-in show cabinets that feel like a yacht interior. The five downstairs bedrooms, too, loop out toward the ocean and can feel as integrated or as separate as a family wants them to feel, Kooklani explains. “You are connected to the downstairs living area, but a family could also close an entire compartment of the house, separating the maid’s room with the second, beautiful family room, three bedrooms, and multipurpose room.” And although the home’s curvy lines lent it its space-agey moniker, Kooklani notes that her interior design was never limited. She opted to work with Christopher Guy Design, known for its sophisticated, contemporary aesthetic. “But an owner could go with a more laid-back, Roche Bobois feel here,” she says.

La Jolla’s neighborhoods are occupied by homeowners who have several residences and the freedom to travel among them. But Essencia’s La Jolla location makes it ideal for well-traveled owners who love the feeling of being in Cannes or Capri—but don’t like to be cold. “Sometimes I text my husband and I say, ‘We should tell no one that we’re still in town, and just vacation in this house,’” she says, laughing. “And we’ll call our chef and two or three people to serve us and just vacation here for the day. Imagine feeling like you’re in the South of France, but it’s January, and it’s the Pacific.” Now one just has to decide on the room from which to take it all in.