Homeowners are designing their own backyard cinemas that let family and friends escape the ordinary without leaving home. Cue lights, camera, popcorn.

Propelled by a blend of drive-in-theater nostalgia, the desire to be outdoors under the stars safely with friends and family, and the play-what-you-want power granted by streaming giants, interest in personal backyard cinemas has exploded in recent years. Alfresco theaters continue to pop up at homes around the U.S. And thanks to rapidly advancing technology in in-home theaters and personal entertainment systems—from multichannel surround- sound systems to precise 4K projectors—there are ample opportunities to design a backyard theater personalized to suit your needs.

“We have done a few outdoor theaters for families, and they are always really fun,” says James DeSantis, star of Bravo’s landscape-design television program, Backyard Envy, and cofounder of exterior-design firm Manscapers.

An outdoor cinema requires a screen (or the equivalent to project onto), a video source (like a laptop), a projector (which may have an internal speaker), cords/ cables, and potentially a sound system, though DeSantis and his colleagues have helped imagine delightfully unexpected attributes, too. “We actually designed a deck where chairs flipped up out of the flooring to make little small backs with pillows so that the kids and parents could be eye-level with their new outdoor movie theater on the lawn below.”

DeSantis emphasizes that outdoor theaters are “actually very simple if you have the space. You can find these blow-up, or pop-up, projector screens that are super easy and movable. They’ve come a long way, and now a projector is so easy to get from anywhere.” He adds that, for most, “portable elements are the way to go, especially as yards get smaller and smaller.” Affixing something permanent to a wall may waste space. Large, immobile contraptions are often an eyesore. “Portable screens are so easy to maneuver—and that way you can also change where you’d like to have your movie-night location in the yard all the time as well!”

Portable screens—which vary in weight, size, and ratio, and from drawstring to motor-powered—range in price from $60 to several thousand. The projector market offers similar variation in pricing, but the most important component when searching for outdoor use is checking for the measure of light output, known as lumens. An outdoor projector needs to deliver at least 2,000 lumens for crispness and clarity. Most projectors also cast an image forward—something worth confirming in advance.

DeSantis himself goes DIY with a system he developed in the summer of 2020. “In the peak of quarantine, in my backyard in L.A., we put up a white sheet and projected
a movie outside with a little portable JBL speaker, and it was great. It really felt different than just watching the same old series or movie inside like every other night.” 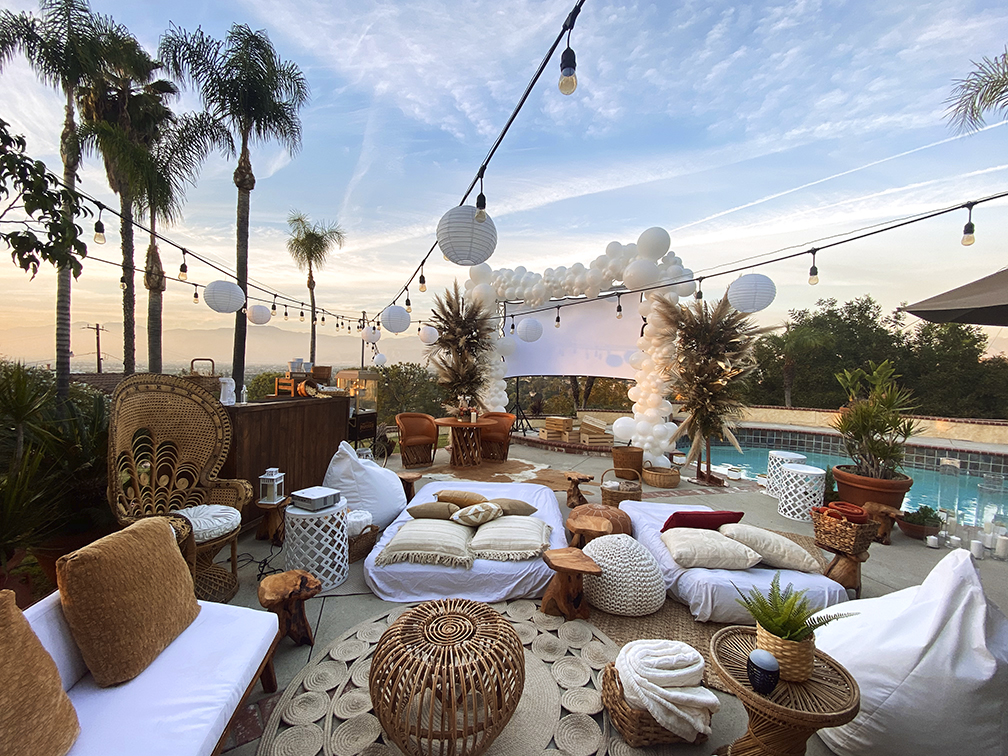 In Brooklyn, graphic designer Jeffrey Keefe took a similar approach. Without an accessible backyard, Keefe brought a projector to his roof and showed a film on the windowless side of a neighboring building to celebrate his roommate’s birthday. He added blankets and chairs to create a comfy setting. Although the noises of the city mingled with the film’s soundtrack, it brought new life to their experience.

Keefe and DeSantis are not alone in these temporary, experiential screenings. City dwellers across the country are exploring the potential of their rooftops for movie viewing.

For those who hope to make an outdoor cinema a permanent part of their home, there are premium components that can be installed in and on decks or patios. Electrical wiring and WiFi considerations are crucial—as are potential sound and light pollution that could disrupt the movie-viewing experience. Of course, comfy furniture is a welcome addition to any such setup. DeSantis also suggests supporting backyard cinemas with items that contribute to the ambience, whether by adding a firepit or even pitching a tent to change the viewing angle.

“Watching a movie outside on the big screen in the balmy summer air truly is intoxicating, almost regardless of what’s actually playing.” 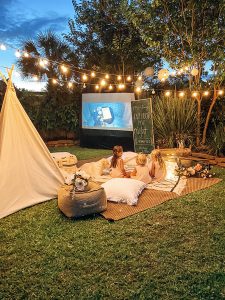 Harry Bradford, a media professional living in Brooklyn, helped his parents set up an outdoor cinema beside their kidney-shaped pool in Connecticut last year. “We thought it would be fun to see if it worked, and if so, maybe that meant we could have some semblance of a summer social life. Outdoor movies seemed about the only way we could think of achieving that safely,” he says.

The Bradfords designed a well-planned outdoor system. The screen “was a 120-inch pull-down projector screen that we purchased and hung from two poles,
that are usually used for the pool vacuum, and that we implanted in holes in the ground using some PVC piping.” The poles were telescoping so they “could easily adjust the height of the screen,” Bradford says. They also paired their projector with a Bluetooth speaker that had a small amplifier strong enough to reinforce the sound.

“It really felt different than just watching the same old series or movie inside like every other night.

“Every Saturday for about 10 weeks we would have movie nights where I’d have my friends over—most of whom (including myself ) had moved back from New York for the summer to wait out the lockdown on the Connecticut shoreline. My parents would have their friends and relatives, as well,” Bradford says. His mother prepared individual bags of popcorn for the guests, and pods of visitors sat more than six feet apart. While their film selection ran from summer blockbusters to esoteric indies, Bradford says, “Watching a movie outside on the big screen in the balmy summer air truly is intoxicating, almost regardless of what’s actually playing.”

Even within the diversity of setups, from DIY projections to tech-forward full-time additions, the essence of the backyard cinema remains the same: enjoying time with others safely. It’s the need for togetherness that has fueled the exploration and innovation, faster in the past few years than ever before. And with that motivation, one can add just about anything to make the alfresco theater experience personal and powerful. In the end, it might even add value to your home.

Find your next home to build your outdoor theater today.