A growing number of young couples and empty nesters are flocking to select towns on the North and South Shores of Long Island, creating trendy enclaves with the cosmopolitan flair of Manhattan.

One of them is Long Beach, a magnet for young couples and singles, not to mention downsizing Long Islanders who are selling their homes elsewhere and want to live by the ocean and make it part of their daily lives.

“People love to walk or ride their bikes or Rollerblade on the boardwalk,” says Joyce Coletti, a real estate salesperson for Douglas Elliman who focuses on Long Beach. “They also like to play beach volleyball, surf, or just sit and watch the waves.” The boardwalk, which stretches for more than two miles, is central to the half- mile-wide City by the Sea, as Long Beach is nicknamed.

Long Beach’s “newness” factor is part of its allure. The barrier island, which Long Beach shares with Lido Beach, Point Lookout, and Atlantic Beach, was rebuilt to a more stringent code after Hurricane Sandy.

Randee and Michael Busch recently sold their home and downsized to a large one-bedroom condo next door in Lido Beach. They made their selection in part because their ground-floor unit has a yard, and the building allowed them to bring their two large dogs.

“Everything I do is in Long Beach,” says Randee Busch, a retired teacher who still teaches one day a week there. “I take my yoga/Pilates class there, my friends are there, I go to the farmer’s market and the restaurants. And I walk the boardwalk.”

Downsizing couples are often selling large homes, so they don’t want anything too small, Coletti says. Many of these buyers are in the $700,000 to $1.5 million price range, which gives them a lot of options.

“Very few buy a one-bedroom,” says Coletti. “They’re looking for two or three bedrooms so the grandchildren can stay over.”

ALONG THE GOLD COAST 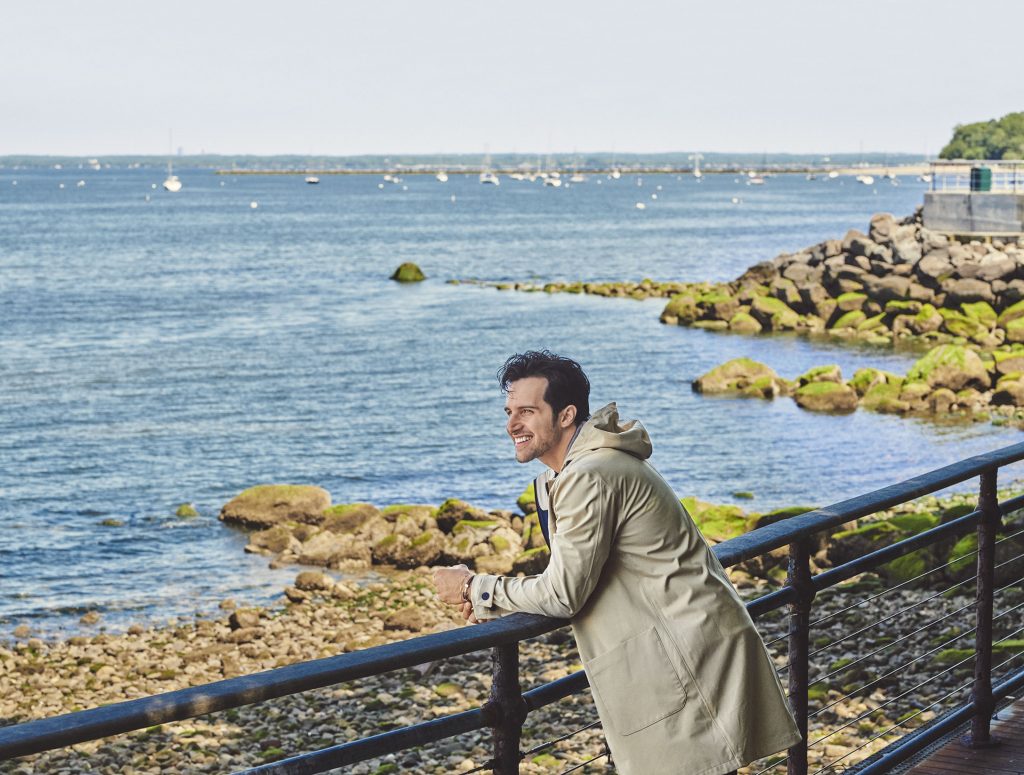 On the North Shore, the greater Roslyn area is hot, according to Maria Babaev, an associate broker with Douglas Elliman, who is based there. Roslyn’s charming downtown includes a 44-foot clock tower, built in 1895, along with bucolic Gerry Pond Park, which has walking paths, a playground, and a duck pond. The walkable village center offers upscale restaurants, boutiques, a movie theater, and a Long Island Rail Road station, from which Manhattan is approximately a 50-minute ride. “Roslyn is an old grist-mill town that has always had a lot of good bars and restaurants,” says Tucker Burns, a resident of Roslyn Harbor. My Father’s Place, a Roslyn music venue that attracted big names before closing in 1987, has been revived inside the elegant Roslyn Hotel.

Sea Cliff is an untouched, unpretentious place with a hippie vibe.

Burns’s favorite downtown restaurants include Kyma, offering upscale Greek fare, and Diane’s Bakery Cafe, for fresh baked goods. Other popular eateries include Limani, Besito Mexican, Thyme, and Hendrick’s Tavern in Roslyn, as well as Cipollini and Toku in neighboring Manhasset, Babaev says. About a mile down the road is the upscale shopping mall Americana Manhasset.

Housing options include Roslyn Landing, a luxury condominium development with two- and three-story townhomes, condos, and single-family homes ranging from about $1.4 million to $1.8 million, notes Babaev.

“Many buyers have downsized from larger homes in nearby communities like Brookville and Westbury,” she says. “People are also coming to the Roslyn area from Brooklyn and Queens, and there are young families moving in, so it’s a good mix of buyers.”

The village has additional condos, co-ops, and rentals, as well as contemporary, colonial, and ranch-style homes, with many historic 19th-century and early 20th-century homes in the mix.
The Village of Sea Cliff is a bit more off the beaten path, and residents like it that way. “It’s a quirky, charming place with a lot of old Victorians,” says Maggie Keats, an associate real estate broker with Douglas Elliman. More than two dozen historic landmarks dot the hilly, one-square-mile community, which overlooks Hempstead Harbor and has a small downtown with eclectic shops and restaurants.

“A lot of buyers revitalize their homes but keep the same style, with the front porch,” says Burns, who grew up in Sea Cliff. “It’s an untouched, unpretentious place with a hippie vibe. There isn’t another place like it on Long Island.”

There are summer concerts at Sea Cliff Beach and Veteran’s Memorial Park, known as Hippie Park. In fact, locals refer to all Sea Cliff parks by nicknames, Burns says. For instance, “Elm Park is Spooky Park,” he says.

The annual Sea Cliff Mini Mart, an arts-and-crafts fair with works by more than 200 exhibitors, celebrates its 50th anniversary in October. “The fair is something you would see in Mayberry,” Burns says. “Everyone goes.”

The town’s artsy, hippie vibe has drawn a number of younger residents in recent years, including lots of families, Keats notes. She once saw a bumper sticker that epitomizes Sea Cliff, in her opinion: It read, in tie- dye letters, “Keep Sea Cliff weird.”

A little farther east, in western Suffolk County, lies the hilly and picturesque North Shore hamlet of Cold Spring Harbor, which “is always pretty trendy,” Keats says. It’s an hour’s train ride from Penn Station. “But in exchange for spending time on the train, residents have a very high quality of life,” according to Keats. “It’s a beautiful community with a beautiful waterfront.”

Cold Spring Harbor’s charming main street is dotted with restaurants and shops in historic houses and extends to the harbor, a haven for sailing, kayaking, and canoeing. Rising above the waterfront is Cold Spring Harbor State Park, which offers challenging hiking.

On the South Shore, Babylon Village “is very popular with Millennials,” says Barbara Leogrande, an associate real estate broker for Douglas Elliman. “It has plenty of places for lounging and dining, from casual pubs to upscale restaurants. The Argyle Grill and Tavern is a village staple. Monsoon serves Asian-inspired cuisine in a converted bank, and the Babylon Carriage House is fun.”

Residents enjoy being able to walk to everything, including the train. (The rush-hour commute to Penn Station is about an hour and five minutes.)

Then there are the beaches. “There’s nothing like Babylon beaches,” says former longtime resident Lisa Mirabile. Her favorite is oceanfront Cedar Beach, one of several beaches operated by the Town of Babylon.

A boater’s paradise, the village owns 440 berths, and boats can access the Great South Bay and Fire Island Inlet. Many homes sit on the bay or one of the canals, or have water views. Single-family homes in Babylon range from about $400,000 to $1 million. Rental options include several Fairfield Properties complexes, with prices that start at about $1,800 for a junior one- bedroom or $2,600 for a two-bedroom.

Another hipsturbian hotspot is Sayville, 60 miles from Manhattan on Suffolk County’s South Shore. People generally discover it when traveling to Fire Island.

“They get off the train and enjoy our downtown and then hop on the ferry to Fire Island for the weekend,” Leogrande says.

“Sayville is quaint and family-oriented. People have close proximity to the beach and the marina and, of course, Fire Island.”

The stretch of Montauk Highway that passes through Sayville is called Main Street. The hamlet has a walkable downtown, plus about two dozen restaurants. Seafood favorites include The Cull House and Kingston’s Clam Bar, Leogrande says, while La Tavola has Italian fare with a lively bar scene. Main Street shops include the Sayville General Store, which sells handcrafted gifts, and A Cottage in the City, offering vintage home furnishings.

The price range for houses in Sayville, like Babylon, is about $400,000 to $1 million, notes Leogrande, adding that rental and condo complexes are also available in and around the hamlet.

Begin your search for a Long Island home today.