Long-time residents and visitors to South Florida, and Miami in particular, can point to distinct epochs in its development over the past several decades. But only a select group has been instrumental in shaping the area into a cultural and artistic powerhouse. “In the past 11 years, we and our developer partners and collaborators, from iconic Pritzker Prize–winning architects to interior designers, have formed a whole new way of living in South Florida,” says Susan de França, president and CEO of Douglas Elliman Development Marketing.

“It is a market that has been blighted by boom and bust,” says Jay Phillip Parker, Douglas Elliman’s CEO of the Florida region. But the basic elements that have always made Miami attractive—good weather, no state income taxes, proximity to fabulous beaches—are still the area’s primary drivers for growth today. “What’s changed is the caliber of wealth that has migrated here: the primary home market versus the secondary or investment market,” he says. “Florida, when I was a kid, was the sunshine state for shady people. Then it became the nightclub epicenter of the world. Now the culinary and educational excellence, and arts, sports, and culture, are driving South Florida.” And, they say, this movement will last. “There’s this extraordinary wealth that wants to double down and feel part of that enhancement,” de França says.

Elliptical floor plans at Five Park in Miami Beach optimize the abundant natural light and expansive views of the city.

The emergence of Miami as a hotbed for artists and collectors is changing not only the area’s culture but also how developers and architects now design residences. This is the ninth year Elliman has been a sponsor of Art Basel, with a significant presence in the Collectors Lounge. “Many of our developers are art collectors, from Jorge Pérez to Harry Macklowe to Aby Rosen, as are many of our buyers,” de França says. “Frankly, the art world has had a significant impact on the new development world—how we design spaces and how we’re thoughtful when we sit with an architect and a designer.” Take, for instance, the coveted glass curtain wall with an ocean view. “You have to think, I have a lot of glass that I’m really proud of, but where am I showcasing my art collection? These are the questions developers and architects are solving for now.” 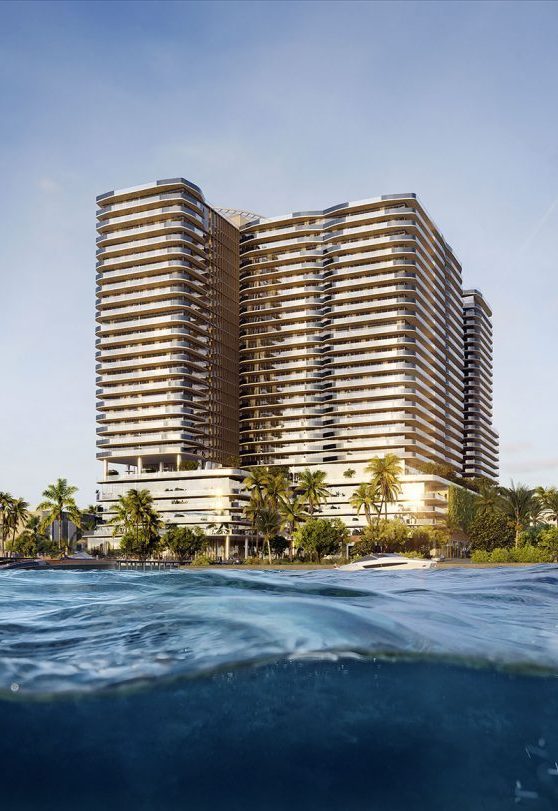 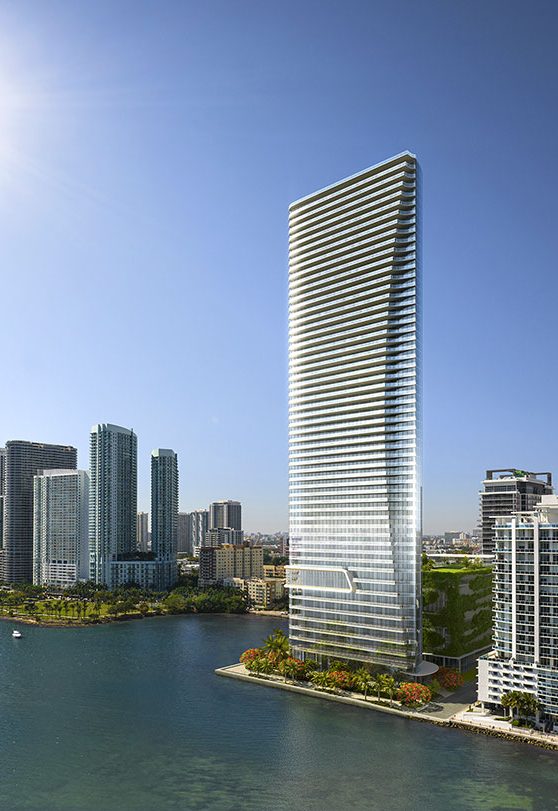 Ten years ago, Parker says, the luxury market was basic: a split floor plan with bedrooms flanking a living room and a small balcony. “We are crafting floor plans we think of as vertical residences in such an exciting way. These are really homes in the sky. There are elements of exclusivity and low density that had never even been contemplated before.” Where the luxury condo building of yesteryear might contain 500 units, “Now we have buildings that are 16 units, or 40 units, and we’ve shaped the lifestyle for many new markets.” As the population density increases in Miami, people have been looking outward to Surfside, Boca Raton, West Palm Beach, Singer Island. You have a market with a spectrum of offerings that is broad and diverse—and we’re advancing.”

Both de França and Parker point to the synchrony between New York and South Florida, as more and more New Yorkers decamp for Miami and surrounding areas. “New Yorkers have a certain culture, a pace, and expectations for a certain intellectual level and people who have an interest in the arts, politics, and sports,” Parker says. “Developers want to bring in major New York culinary offerings, and we’re really thinking about what the buyer is going to need and want, whether it’s a live/work space or dedicated Pilates rooms or blow- dry bars. We’re able to understand buyers’ wants in a way that differentiates us in the competitive landscape because we have this unique connectivity to our brain trust in New York,” he says.

The Residences Six Fisher Island will be the last built condo development on the private island and include a membership to the Fisher Island Club, with concierge service, true indoor-outdoor living, and ultimate privacy. EDITION Residences, Miami Edgewater will be the first private EDITION residences in the world, with unobstructed views of Biscayne Bay, luxury amenities, and access to EDITION properties around the world. 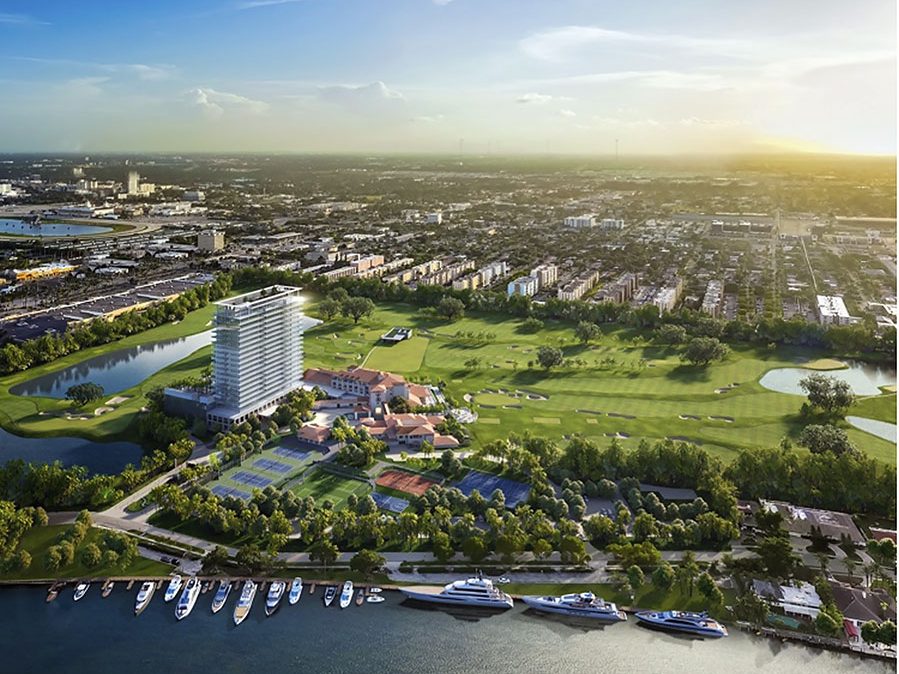 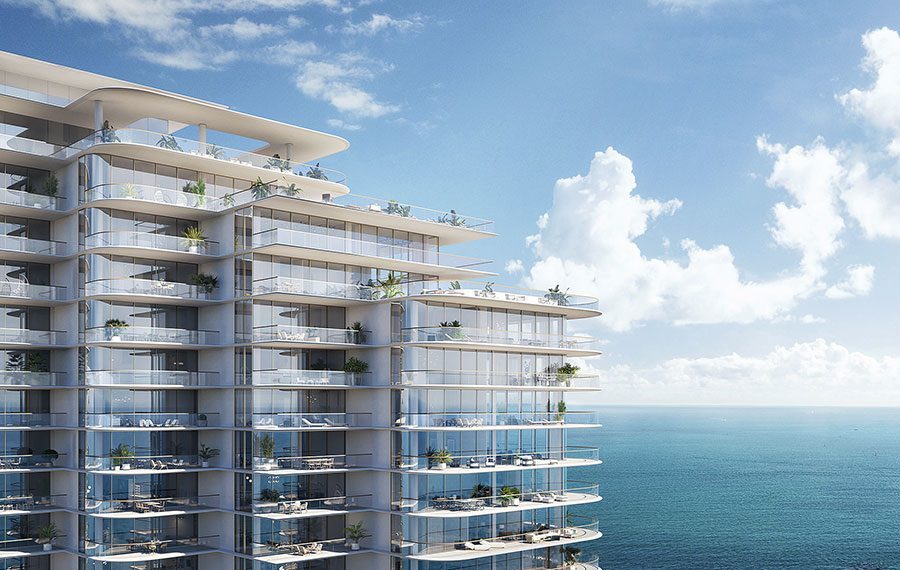 The Perigon Miami Beach will feature two- and four- bedroom residences, all with ocean views.

That level of luxury now extends well into other South Florida cities. “I remember when we worked with David Martin and Terra Group on 87 Park. It was one of the first times that an architect of the caliber of Renzo Piano was working with us to create a luxury product in a market like Surfside, and we were able to set records in a way that I don’t think any other brokerage firm has done,” Parker says. “At the time we launched the Bristol, there was virtually no luxury market in West Palm Beach. Jorge Pérez bet me that I wouldn’t sell it for over $1,000 a square foot, but we sold it for close to $2,000
a square foot and it’s now trading for $3,000 a square foot.” The new Olara in Palm Beach sits on a private marina with direct Intracoastal access and has a full two acres of resort-style amenities for its residents.

The importance of the evolution among South Florida cities is not simply about creating more and more incredible residences but also community. “Today there’s not a pocket in this market that isn’t sprinkled with top-tier institutions, from world-class dining to private clubs to golf courses,” Parker says. “We’ve become a market of fully formed pods of lifestyle. You want to be in the Design District? You can dine, shop, work out, live in that market. The same thing is true in Wynwood, Edgewater, Miami Beach, Coconut Grove, all of which have exploded with lifestyle and luxury residential offerings. It has solved the Achilles heel of any dense population—transportation. I think that’s a very special transition in this market,” he says.

“Everyone wants to be around like-minded people,” de França says, “and this new level of luxury and community affords them that.”