Sure, some of these East Village gems may be temporarily closed or open for outdoor seating only, but you can still read about them now before adding them to your “to-try” list. From upscale cocktail bars to vegetarian Philly cheesesteaks, this East Village, New York City neighborhood guide has it all.

When Joaquín Simó landed in the East Village as one of the opening bartenders at Death & Co. in 2006, the now 42-year-old immediately connected with the neighborhood’s past as a center where individualistic, against-the-grain artistic movements like punk music and street art were born. “It’s been a place where, even in one of the most expensive cities in the world, you could come and find a small space to do your thing and make your voice ring through,” he says.

Today, as one of the partners of Alchemy Consulting—and a cofounder of the upscale, 88-seat cocktail bar Pouring Ribbons (225 Avenue B, 917.656.6788)—Simó recognizes that the neighborhood still fosters a creative spirit; only the medium has changed. “We’ve seen a massive evolution in the East Village where it’s become the premier neighborhood in New York City for eating and drinking,” he says. “Block for block, the density and quality of offerings in the East Village is unparalleled in this city. It’s my favorite neighborhood to be out in.”

Simó may not be a vegetarian, but he makes a point to eat at Superiority Burger at least once a week. “It’s just extraordinarily good food,” the cocktail specialist says. “I love the New Creation; it’s their take on a vegetarian Philly cheesesteak, and it shows off what they do really well. Instead of thinly sliced beef, they’re using yuba—the skin that forms on tofu—and they’re griddling it. It’s not necessarily trying to taste like beef, but it’s satisfying for all of those same reasons. You get a great, snappy, charred texture—with the right amount of chew—on a soft, absorbent potato bun. You get the umami hit, and the texture is so good.” 490 E. 9th St., 212.256.1192 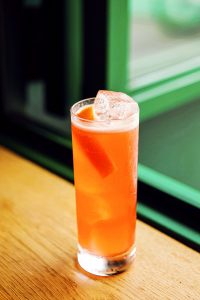 When Simó wants a well-crafted cocktail in an environment that rivals Pouring Ribbons, he saddles up to the bar at Mister Paradise. “It’s a really dynamic environment, and it always has good energy in there,” he explains. “When you start interacting with the staff—and as you’re eating and drinking there—you realize that they’re taking everything really seriously except themselves. Nothing about the environment or staff is off-putting or pretentious. Everybody there is a raging goofball, and they’re good about transferring their enthusiasm to everyone, and their knowledge to the people who want it.” 105 First Ave. 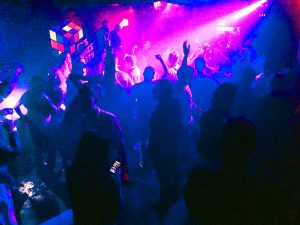 For a journey back in time, Simó recommends a visit to The Pyramid Club. “This is one of the bars where artists like Jean-Michel Basquiat and Keith Haring went and danced in the eighties,” Simó says. “There aren’t many bars that have survived multiple generations of gentrification over the years. This was also the first bar in the East Village to feature drag queen performances. They’re still producing ’80s and ’90s dance parties, too; that music will never get old.” 101 Avenue A, 212.228.4888 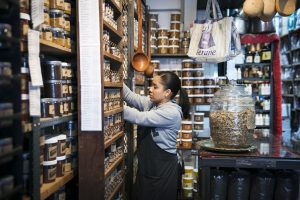 “When I’m looking for something obscure or when I need a cooking product at a higher level, I go to SOS Chefs,” says Simó. “The store has 15 types of vanilla beans, and the owners are making their own hydrosols [aromatic flower waters]. The best orange flower water I’ve ever tasted comes from there, and their rosewater smells like beautiful flowers. They also have sweet limes. That’s something that I grew up with in Ecuador, and I can’t think of another place in New York where you can find them.” 104 Avenue B, 212.505.5813

Find your next home in the East Village today.