Architects and designers are breathing new life into some of the city’s most pedigreed buildings.

Even as new Manhattan micro-apartments grow in popularity, another movement is afoot: a return to more gracious times. “Ten to 15 years ago, there was so much new all-glass construction,” says Kathy Murray, whose team of Douglas Elliman brokers, The Kathy Murray Team, is currently selling residences in some of the oldest luxury buildings in Manhattan: The Chatsworth and The Astor. These historic Beaux Arts–style masterpieces on the Upper West Side have recently been reimagined in their original glory, though with the best in modern conveniences.

‘The scale of these places lends itself to the feel of a real home…people appreciate the timeless appeal.’

“Anyone can build a glass tower,” she says, “but the scale of these places lends itself to the feel of a real home. From a design perspective, people appreciate the timeless appeal. From a cost perspective, the kind of craftsmanship you find [in the historic buildings] would be prohibitive; you couldn’t even find the craftsmen to do it.” In The Chatsworth, wide herringbone floors, coffered ceilings, crown moldings, and hand-carved walnut paneling speak the language of early 20th-century luxury—but state-of-the-art kitchens and social rooms bring it firmly into present day.

Ripe for reinvention, a number of New York’s most iconic buildings are getting new lives as luxury living options. Residents have the advantages and cachet of living in a building steeped in history and architectural detail, but with perfectly integrated modern amenities. These are some of the best of the city’s newly redeveloped landmarks. 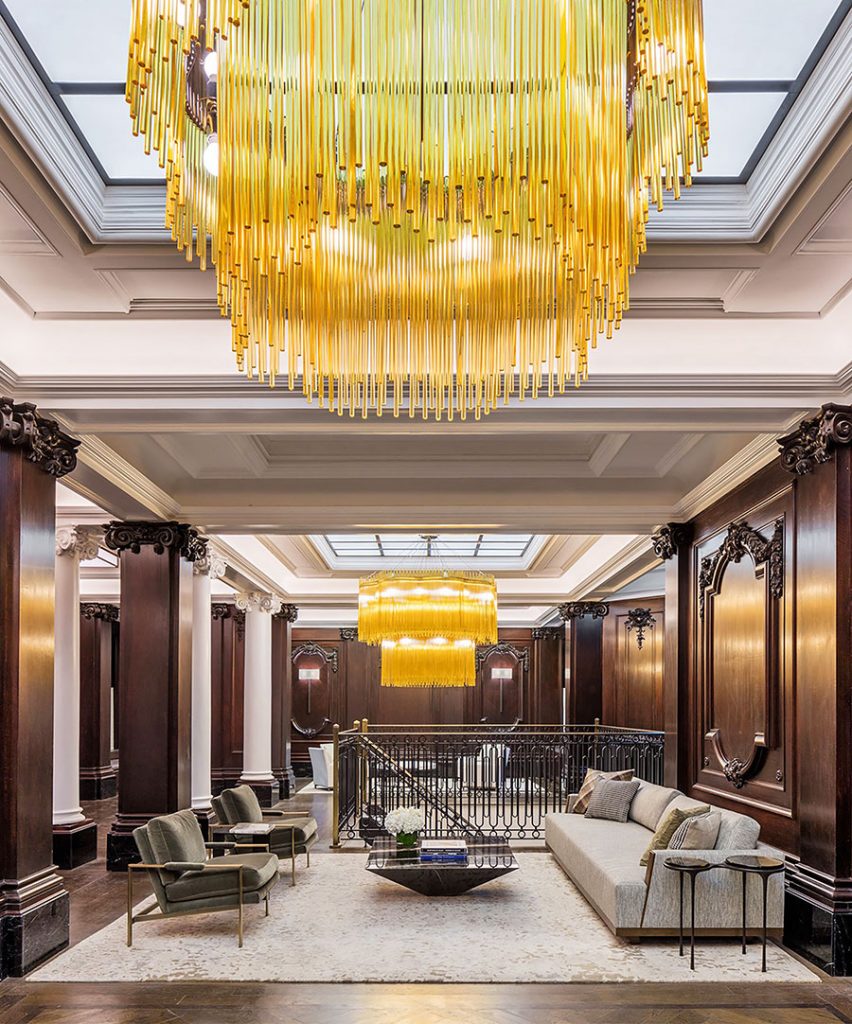 A full excavation of the lower level of this 1904 landmark building on 72nd Street overlooking the Hudson River turned forgotten storage space into clubby private dining and lounge areas with vaulted brick ceilings, a private screening room, a game room, and a children’s room. It all lies below one of the Upper West Side’s most prestigious buildings, in which 58 residences—including one-to-five-bedroom apartments, townhouses, and penthouses—are reimagined by Pembrooke and Ives, staying true to the building’s prewar scale and proportion. The Beaux Arts details of the lobby, such as Corinthian columns and hand-carved walnut paneling, are layered with modern furnishings and custom chandeliers— perfect contemporary foils. The residences, too, are dramatic combinations of elegant touches like crown moldings and freestanding marble tubs with sleek open floor plans and the most contemporary of kitchens. thechatsworth.com 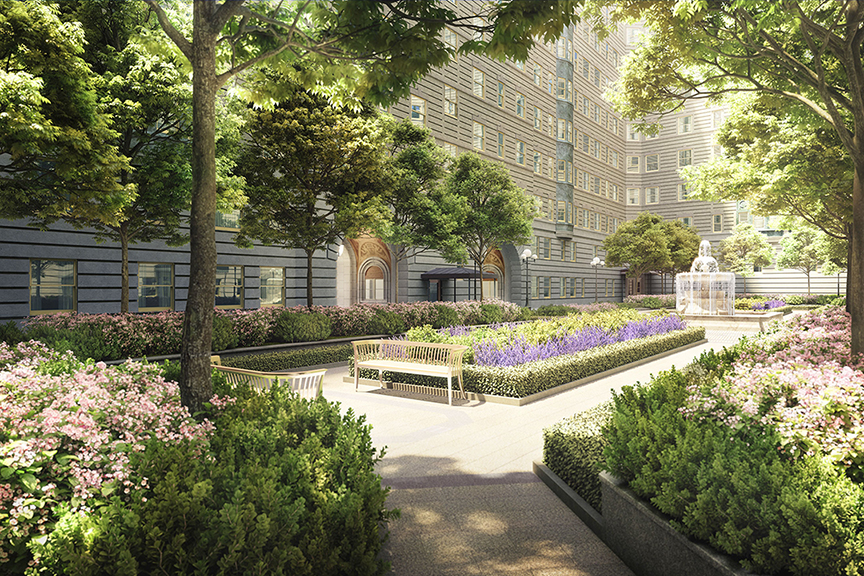 One of a handful of full-block apartment buildings in New York City, The Belnord retains a sense of exclusivity; passersby get a glimpse through two grand archways decorated with frescoes of seraphim into an inner courtyard with landscaped gardens, but that’s as far as most will ever go. Designed as an Italian Renaissance–style palazzo into which horses and carriages could travel, the building still appears much like it did in 1908, but with a widened driveway to accommodate SUVs rather than carriages. It is The Belnord’s interior that has been stunningly reimagined for modern living: Robert A.M. Stern Architects took formerly separated spaces and opened them up. And while there are nods to history, such as 10-foot ceilings, the effect is sleek and modern. Master baths are finished with Siberian White marble slabs, and kitchen counters are topped in Calacatta Gold marble, with state-of-the-art appliances. The building hails from an era when many large apartment buildings served as residential hotels, but none would have had the amenities of today’s Belnord: a 22,000-square-foot private courtyard and garden, 24-hour attended lobby, and its own Belnord Club, with a double-height sports court, club lounge, dining room, children’s playroom, and teen room. thebelnord.com 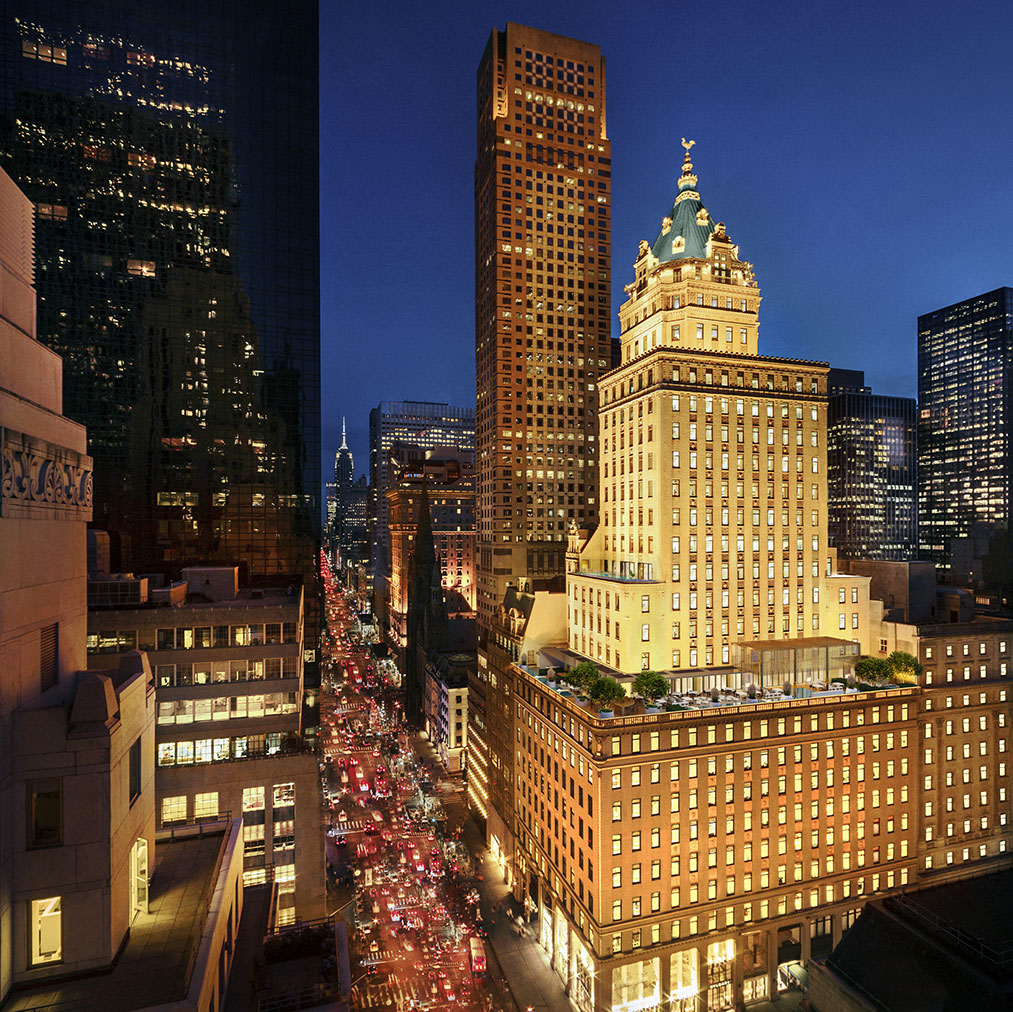 Luxury hotel company Aman is known for building hotels on exotic islands, as well as hotels that function as their own little islands in mystical, remote areas of southern Utah, Bhutan, Morocco, and other places. So some may find it unusual that the company’s newest “island destination” is in fact the island of Manhattan, right on Fifth Avenue and 57th Street—hardly isolated. Furthermore, Aman New York now occupies the entire Crown Building, the iconic 1921 neo-classical Beaux Arts masterpiece that was the first home of the Museum of Modern Art. The company has opted for a full restoration of its original details and added the subtle tones and modern, Asian influences for which its hotels are known. Urban destinations are Aman’s next wave, and it has designed its 19 new residences and Crown Penthouse to be a tranquil personal sanctuary. The residences occupy the floors above an 83-room Aman hotel and have full access to its dining venues; three-story spa with swimming pool, spa houses, outdoor cabanas, and firepits; and its 10th-floor wraparound Garden Terrace. All are serviced by the hotel; some have outdoor terraces with heated pools. aman.com/resorts/aman-new-york 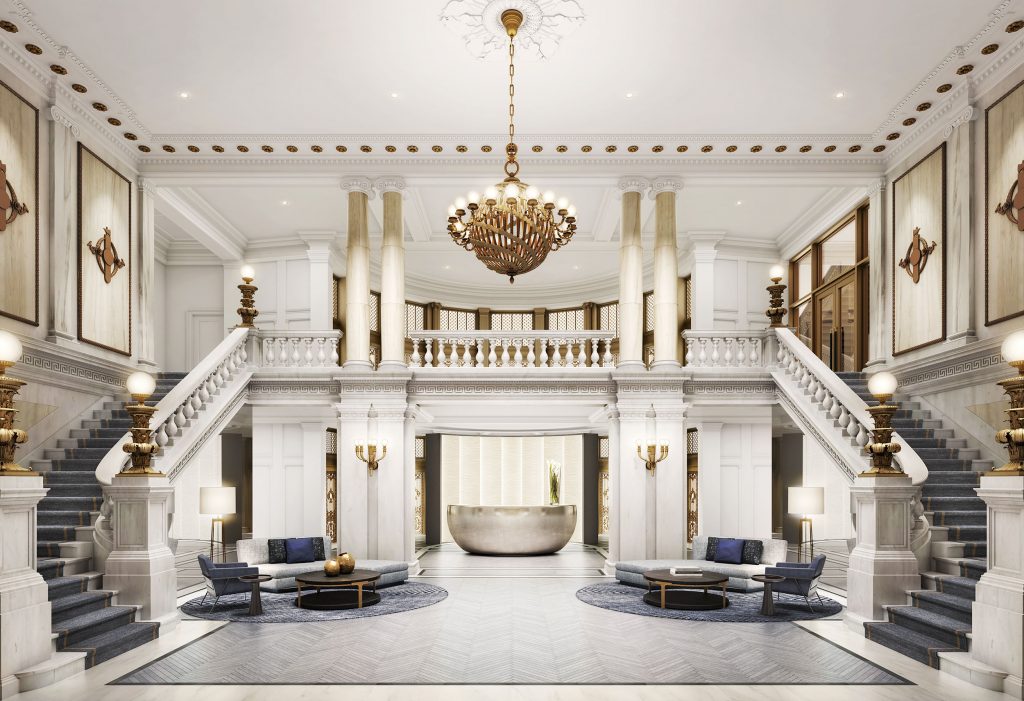 One of the grandest of the city’s new condo buildings began its life in 1894 as the headquarters of the New York Life Insurance Company. Though it would wait 120 years to become a residential building, the Renaissance Revival structure at 108 Leonard Street in Tribeca did presage some of the city’s most iconic luxury apartment buildings. Its architects, McKim, Mead, and White, designed the original Penn Station, the Washington Square Arch, and even renovated the White House for President Theodore Roosevelt, then went on to build opulent residences. A white marble columned facade opens into a spacious lobby flanked with a curving double stair; above, 167 residences range in size from one to four bedrooms. Architect Jeffrey Beers has taken a contemporary approach to Renaissance Revival, installing high-performance Scavolini kitchens with marble waterfall islands and Miele appliances, juxtaposing these modern elements with oversize moldings and chevron-patterned oak floors. A new wellness center includes a 75-foot lap pool and fitness center, and an entertainment suite has its own wine cellar, billiards room, and screening room. 108leonard.com 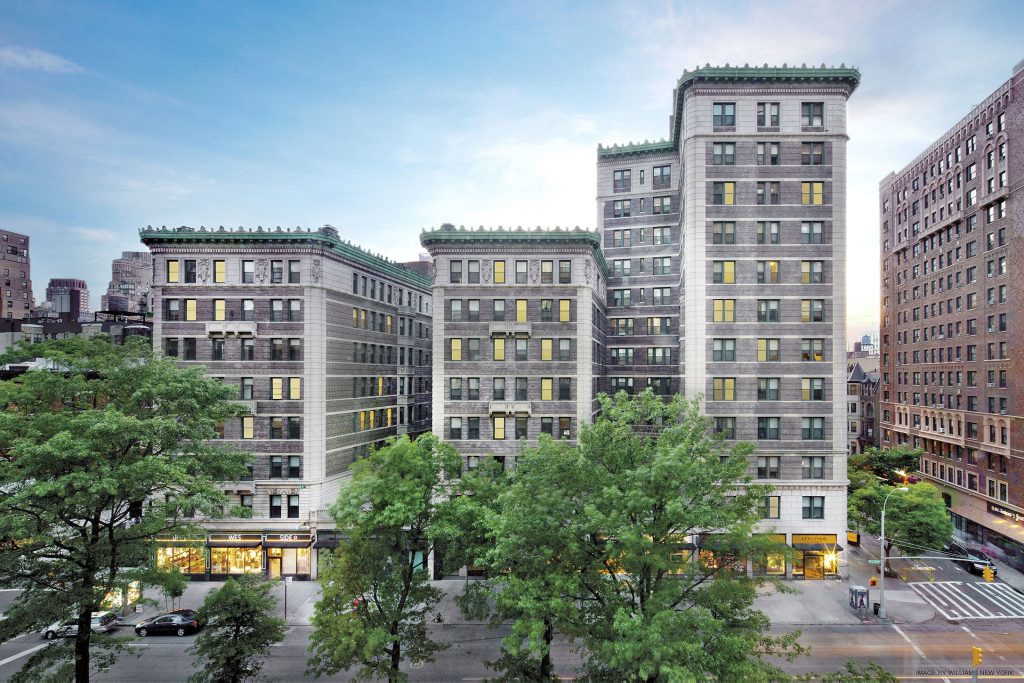 Few names epitomize Gilded Age New York City like the Astor family, whose influence could be felt across business, politics, and society. The family owned one-twentieth of all New York City real estate in the late 19th century. (You’ll recognize the name in the Waldorf Astoria.) William Waldorf Astor commissioned architects to design two towers of The Astor in 1901, and a third in 1914 to accommodate penthouse-style apartments for wealthy businessmen who were moving to the Upper West Side. The Astor covers a full block between West 75th and 76th Streets. After the sale of the building to development group HFZ in 2014, an exquisite refurbishment by interior design firm Pembrooke and Ives has emphasized the building’s prewar sensibility with custom inlaid floors and moldings and restored wood-burning fireplaces, while creating spacious marble-clad baths with stone mosaic walls and warmly contemporary kitchens. Restored crown molding and marble wainscoting in the lobby balance modern details like a marble slab concierge desk. theastor.com

The Steinway Hall building has welcomed everyone from Van Cliburn to Billy Joel into its famous basement piano bank to select their instruments. In Steinway Hall, Vladimir Horowitz and Sergei Rachmaninoff famously met and practiced together. This landmarked building, at 16 stories high, has anchored 57th Street since it was built in 1925 from adjacent townhouse properties. When its slender terra cotta, bronze, and glass tower is completed in 2020 integrated with the original structure, it will be one of the tallest buildings in the U.S. (82 stories) and the thinnest skyscraper in the world. Though it has modern bragging rights, its design embraces the timelessness of a monument to classical music and architecture. Its 46 residences start at 3,873 square feet and have 14-foot ceilings, formal entrance galleries with white stone floors, and gray oak kitchens. Its master baths have white onyx walls and floors, with custom sconces and bronze fixtures—all perfectly contemporary but paying homage to their architectural progenitor. 111w57.com

Find your next Manhattan masterpiece today.