TheArsenale is a unique showroom tailored to impressive—and seldom-seen—vehicles. It’s also the physical manifestation of a brand that could soon change where and how we get around.
—By Shaun Tolson

On the first Friday in July, evening traffic down NE 41st Street in Miami moved at a slower-than-normal pace, at least for a few minutes. The slowdown occurred once Will Smith coasted out of the front entrance of TheArsenale’s showroom on a low-slung electric drift trike made by Fiik—a boutique Australian electric skateboard company, and one of more than 150 specialty- vehicle builders TheArsenale promotes through an online marketplace as well as within its brick-and- mortar showrooms. Twisting the throttle, the actor sped down the main thoroughfare of the city’s Arts District, gleefully executing slide turns thanks to the vehicle’s rear-wheel-drive powertrain.

During the days when Hollywood A-listers aren’t test-driving some of the unique vehicles on display inside the showroom, the 6,000-square-foot gallery still attracts plenty of attention. With the boutique’s broad glass entrance doors folded open, passersby are inevitably lured inside once they catch a glimpse of the store’s show-stopping vehicle on display: a six-person submarine built by SEAmagine Hydrospace Corporation that can explore the depths more than 3,000 feet below the ocean’s surface.

“When you walk in, it prompts a lot of questions,” says April Palmer, the Miami showroom’s director of sales and marketing.

The leading question that a first-time visitor most commonly asks is an obvious one: What is TheArsenale?

Objectively, TheArsenale is a brand that was founded by Patrice Meignan six years ago, one rooted in exciting and futuristic forms of mobility. Subjectively, you might say that TheArsenale is the kind of store that could satisfy many of James Bond’s whims—a one-stop shop for the British secret agent, should he ever be without the services of MI6’s trusty Q.

The one thing 007 couldn’t walk into the Arts District showroom and request is a specialized weapon, despite the TheArsenale’s name. Meignan was inspired not by bunkers stocked with advanced weaponry but by the Venetian Arsenal, a once robust network of shipyards and armories that built most of the Italian republic’s maritime trading vessels—ships that played a pivotal role in Europeans’ exploration of the world. As Meignan explains, he conceptualized the brand for an affluent and elegant clientele with a passion for cars, planes, yachts, and other forms of personal transportation.

“This is where you put your tools of mobility,” he says.

Meignan leveraged more than two decades of work in the publishing industry—most notably cofounding Intersection, an automotive magazine with an irreverent perspective—to create a company and a brand that celebrates and emphasizes the cutting edge of mobility. The now 40-year-old also tapped into many years spent as a communications and content consultant for several mobility brands. Ultimately, he decided that he wanted to be a seller, not just an adviser.

When TheArsenale launched in 2015, Meignan was also able to leverage relationships with boutique brands and provide a platform to introduce those lesser-known firms to the world. “During the last 20 years, we’ve seen a lot of new brands coming on the market,” he says. “They’re not big companies; they’re agile and super adaptive. Elon Musk played a big role to show the way for these young designers and builders. Every field of mobility has been touched by this new process and this new way of innovating things.” 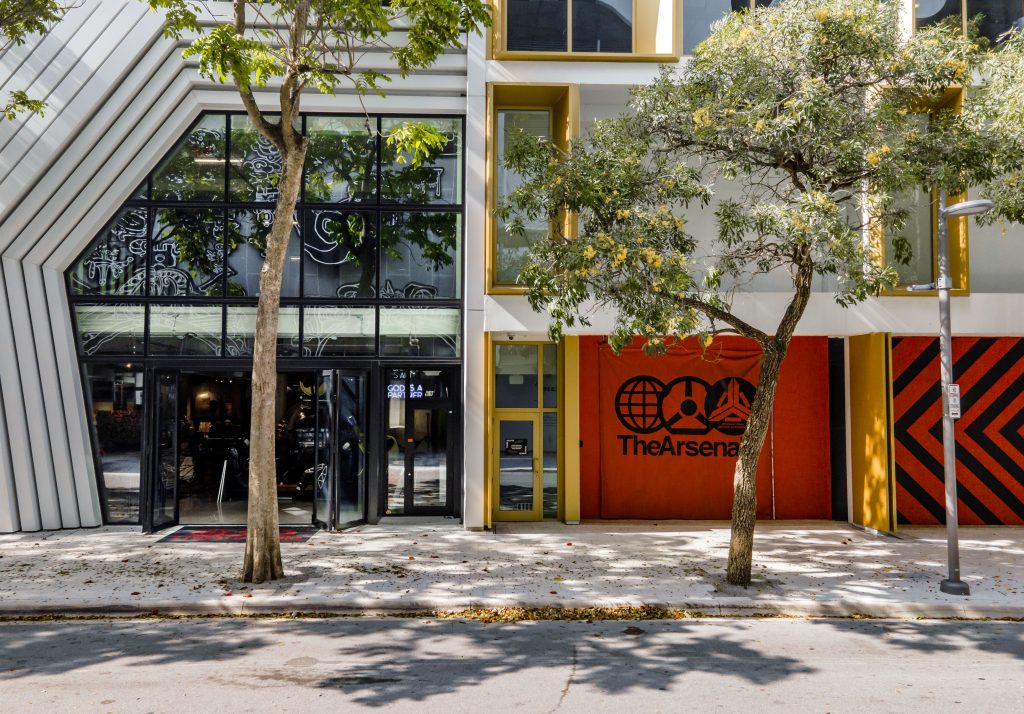 Meignan speaks not only from a seller’s and promoter’s point of view but also from the vantage point of someone building an influential, futuristic vehicle of his own. Instead of spending this past summer in Miami as he usually does, Meignan was based in his native southern France, collaborating with designers and engineers on the development of a flying car—a venture that might sound based in science fiction…until the Frenchman opens up on the topic.

“The next big thing for me is the third road,” he says. “You have the road for the car, the air for the plane, and in the next 10 years I think we’ll be able to fly around 100 feet above the ground. So we decided to launch our flying-car company. It’s not so crazy, because there are 52 players in the category, including Boeing and Rolls-Royce.

“The tech is available pretty much everywhere,” he continues. “But the big thing we have for us is TheArsenale brand. It’s a cool brand in the industry, and when you have a brand that is strong, you can do whatever you want.”

In the beginning Meignan wanted to create a company that could introduce as many as 150 boutique vehicle manufacturers to a discerning clientele that had both the passion and the means to purchase those creations. Six years later TheArsenale has exceeded that number, but Meignan has no intention of limiting the scope of the company’s range. “It’s quite infinite,” he says of how far the brand can go and the number of partnerships he can make with vehicle manufacturers (garages, as Meignan refers to them). “The car industry is moving but not that quickly. The flying car is moving a lot. E-mobility is moving a lot. It’s a super-dynamic industry. Every week we partner with a new garage or new brand.” 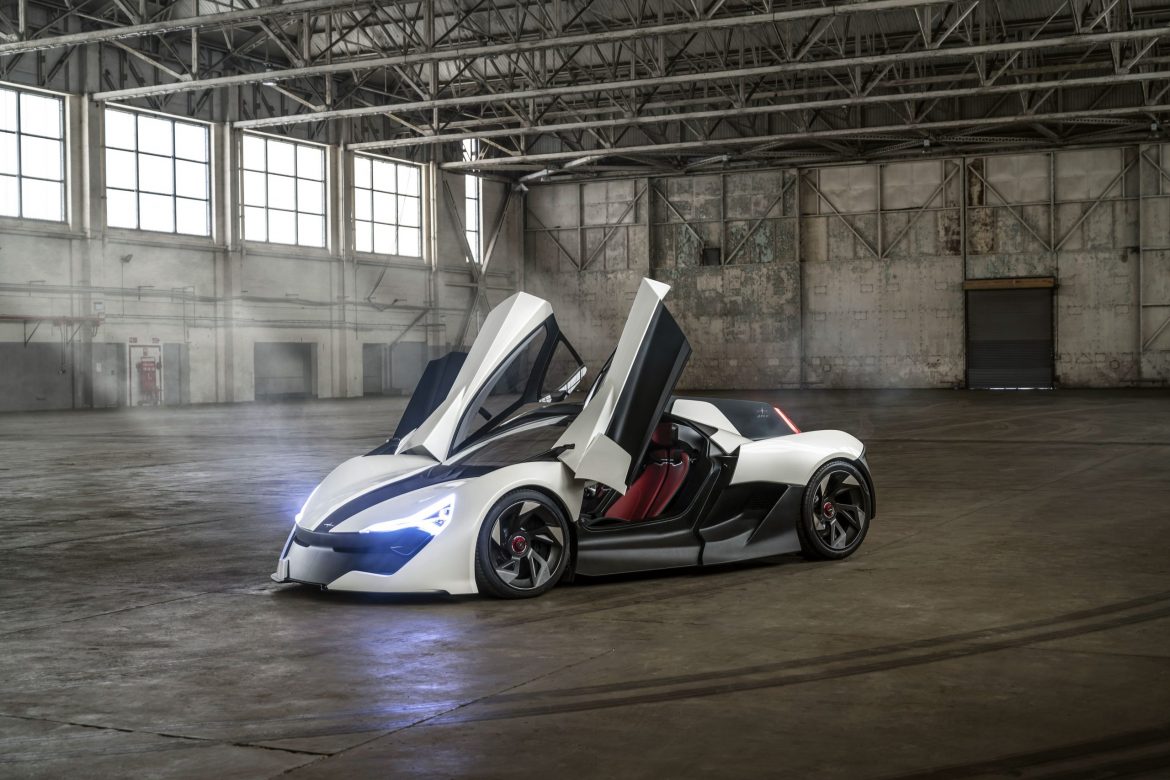 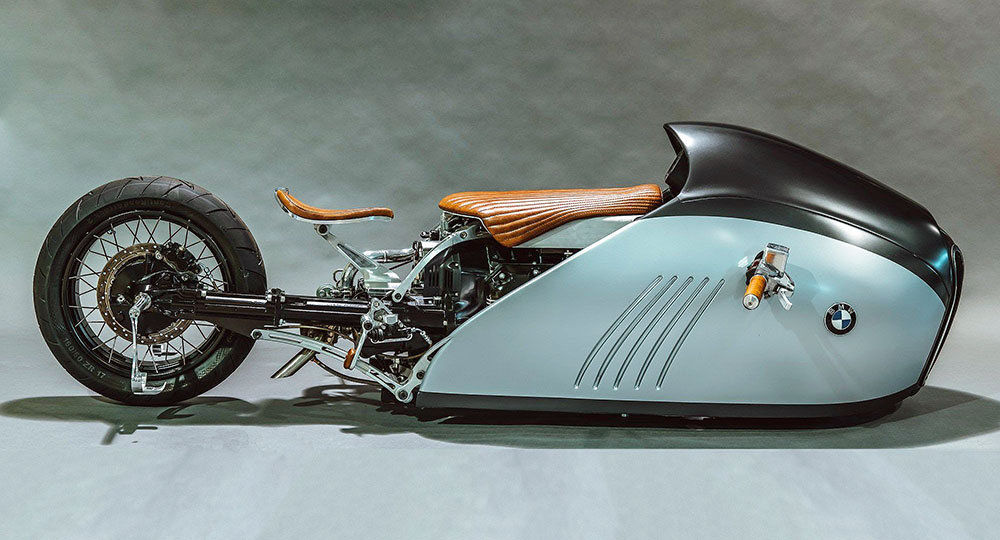 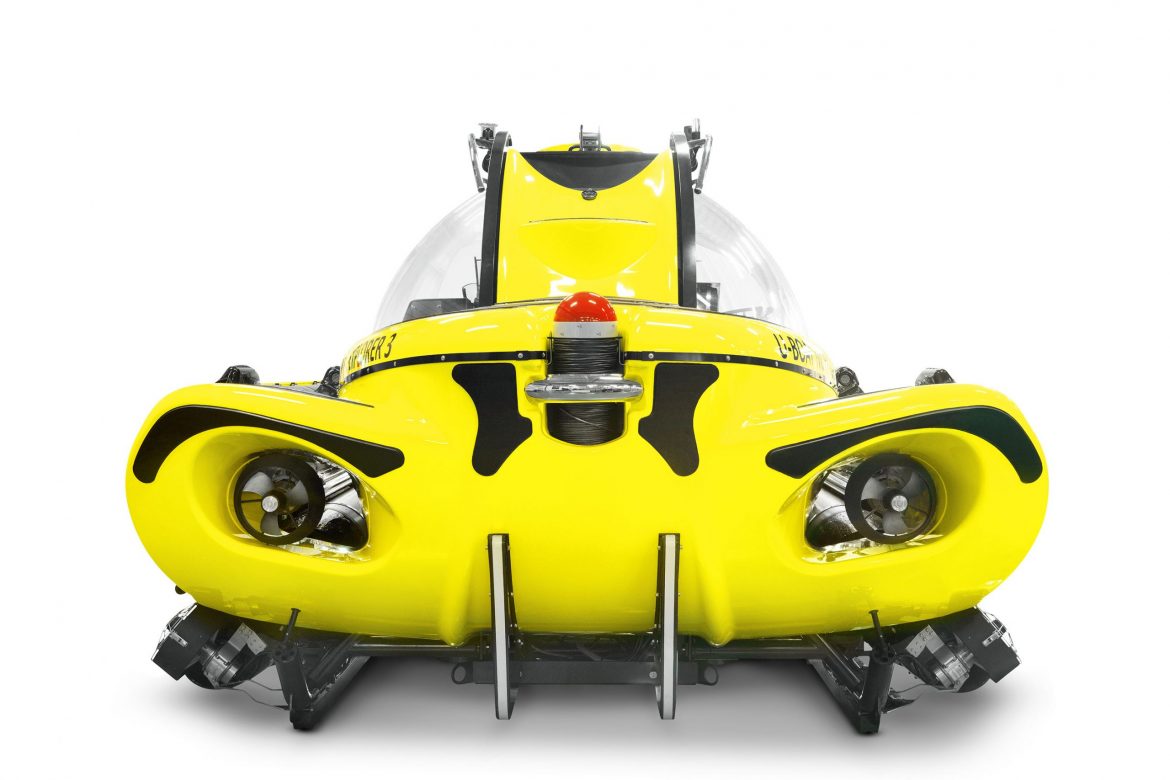 TheArsenale’s Miami showroom floor isn’t a static place. Aside from the aforementioned submarine, which has an all-but-permanent place near the front entrance of the gallery, the rest of the vehicles on display will rotate in and out of the space regularly. In fact, Meignan and Palmer both acknowledge that the goal is to maintain the showroom’s existence as a place where first-time visitors and regular customers alike can come in and get a glimpse of something they’ve never seen before. “We’re accumulating all of these things to give our clients and our customers that ‘wow factor’ experience,” Palmer says.

In most cases, the vehicles on display are also available for test drives, as Will Smith proved in a not- so-discreet manner earlier this summer. “If you’re going to spend that amount of money,” Palmer says, “you want to try it first.” 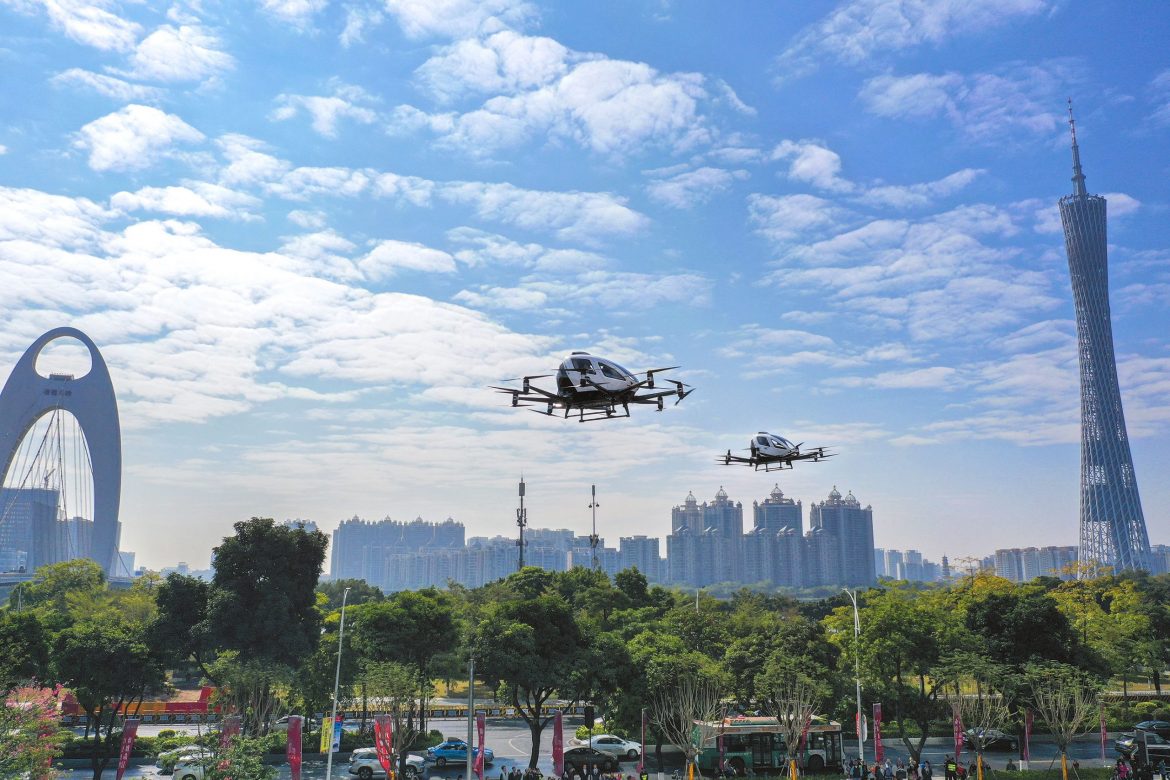 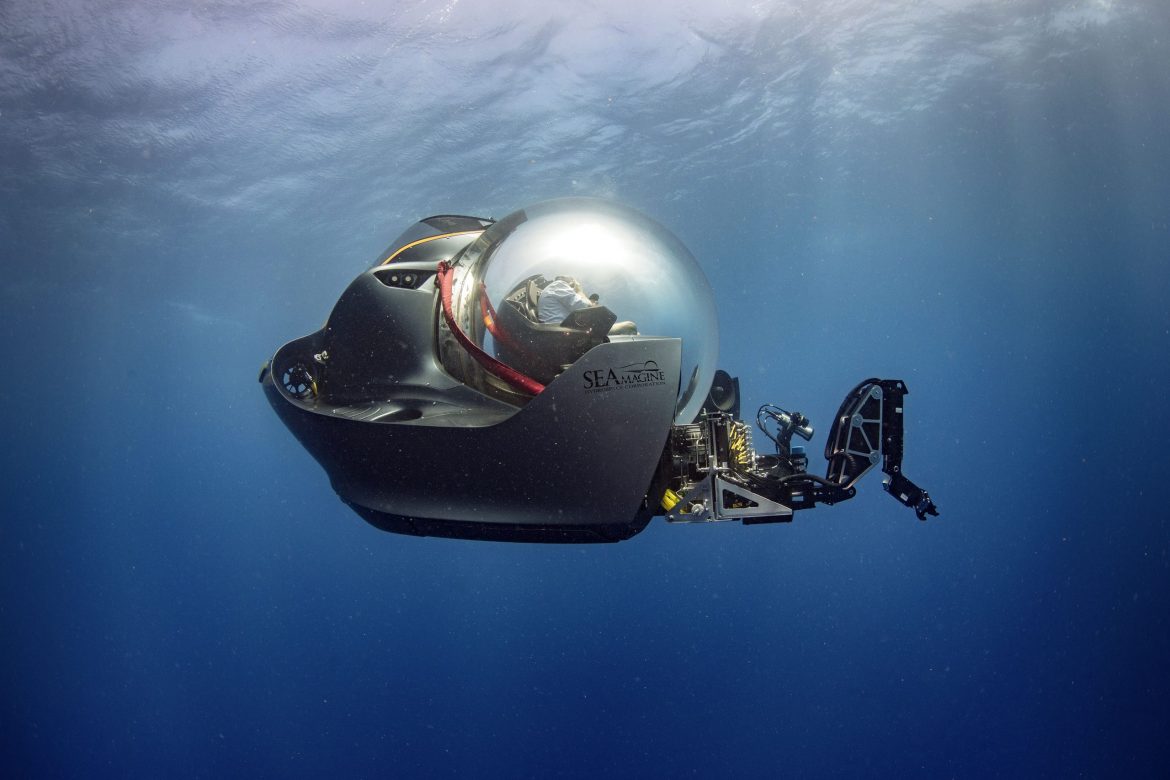 Despite all the showroom’s eye-catching and headline- grabbing vehicles, TheArsenale sales are rooted mostly in artwork, clothing, and fashion accessories—all of which still share a mobility theme. In that way, Meignan relates the storefront to a museum. “People get a great journey and experience and joy, but if they can’t leave with a submarine, they can leave with a piece of apparel,” he says. “It’s how we became a brand—as a marketplace.”

All that being said, Meignan acknowledges that the annual sales revenue the Miami showroom generates isn’t the driving force behind the brand, nor is it the variable he uses to determine the showroom’s (or the brand’s) overall success.

“Every day I have people coming in and saying, ‘I’ve never seen that before!’ That’s good enough for me,” he says. “That’s my salary.”

Explore your next move in Miami with an Elliman agent.