I’m a Miami Beach guy and a self-styled waterman, so when I heard about a premier snorkeling destination in Palm Beach County, I couldn’t resist seeing it for myself. My first stop was Pura Vida Divers on Riviera Beach, where the staff outfitted me with a rental snorkel, a mask, a pair of smart blue-striped fins, and a safety flag to alert boaters of my presence. Next, I headed to Phil Foster Park to begin my adventure.

In recent years, the park—actually a small island in the center of the Blue Heron Bridge on the Intracoastal Waterway—has become world-renowned for its Snorkel Trail. Akin to an underwater hiking trail, the Snorkel Trail is an 800-foot-long manmade reef constructed by Palm Beach County in 2013 using 600 tons of limestone boulders and other submerged structures that create an idyllic habitat for sea creatures ranging from octopi and squid to seahorses and spotted rays—as well as the many two-legged visitors who come to admire them.

“Phil Foster Park is a really important diving and snorkeling spot on the Eastern Seaboard,” says Matthias Fretz, a Juno Beach–based Douglas Elliman realtor  associate. “People come from all over the world to Blue Heron Bridge. You swim right off the beach and within 20 yards, you’re surrounded by tropical fish, lobsters, eels, and rays. It’s a remarkable place.”

Like me, Fretz is a relocated Jersey boy, and we share a love of South Florida that stems largely from our enthusiasm for the local waterways. Fretz is a spear fisherman, boater, and surfer. I’m more apt to swim laps in Miami Beach’s Flamingo Park pool or freestyle off the beach, so wading into the turquoise waters off Phil Foster Park was a refreshingly novel experience for me.

I started off using only swim goggles, figuring I would add the rest of my gear when the water got clearer as the sunny afternoon wore on. The trail spreads out in a loose semicircle and ranges from about six to 12 feet in depth, though there are no markers above the water level to show the uninitiated where it is. I swam out to a group of snorkelers who seemed to have found something interesting. When I reached them, they pointed out the manmade reef below us. I dove down and was intrigued to discover distinctive branches of Staghorn coral, a mainly Caribbean coral that doesn’t grow north of Palm Beach. I circled around, admiring it from all angles, then headed back to shore to grab my snorkel, mask, and fins.

The trail’s most iconic landmarks are its shark statues (three 1,500-pound gray stone hammerheads), so I asked a lifeguard to point me to them. They turned out to be directly in front of the lifeguard tower closest to the inlet. I’m a strong swimmer, and the current in the inlet was only mildly challenging, but I could see conditions changing fast. This is why the experts recommend getting in the water at slack tide—the period just after the moment of high tide when the water is still.

As soon as I reached the shark statues, I understood the hype. All around were gorgeous fish—striped varieties, many in vibrant blue and yellow hues, and tropical needlefish. (Blue Heron Bridge is home to more than 750 species of marine life.) As I circled around, admiring them, I caught a sudden brilliant flash of blue. The next moment, more than 50 identical metallic-blue fish, each almost a foot long, came streaming past me. Clearly, I was in the middle of a veritable fish highway!

I was still paddling around, taking in the sights, when the same school of fish, again in perfect formation, swam past me in the opposite direction. That was my cue to end the day—on a high note. I’d built up a hearty appetite, so I headed to Johnny Longboats in Riviera Beach (a fine recommendation from Pura Vida Divers). After a delicious meal of peel-and-eat shrimp and grouper bites, I headed home, retracing my path just as my dazzling aquatic companions had retraced theirs.

Know Before You Go: 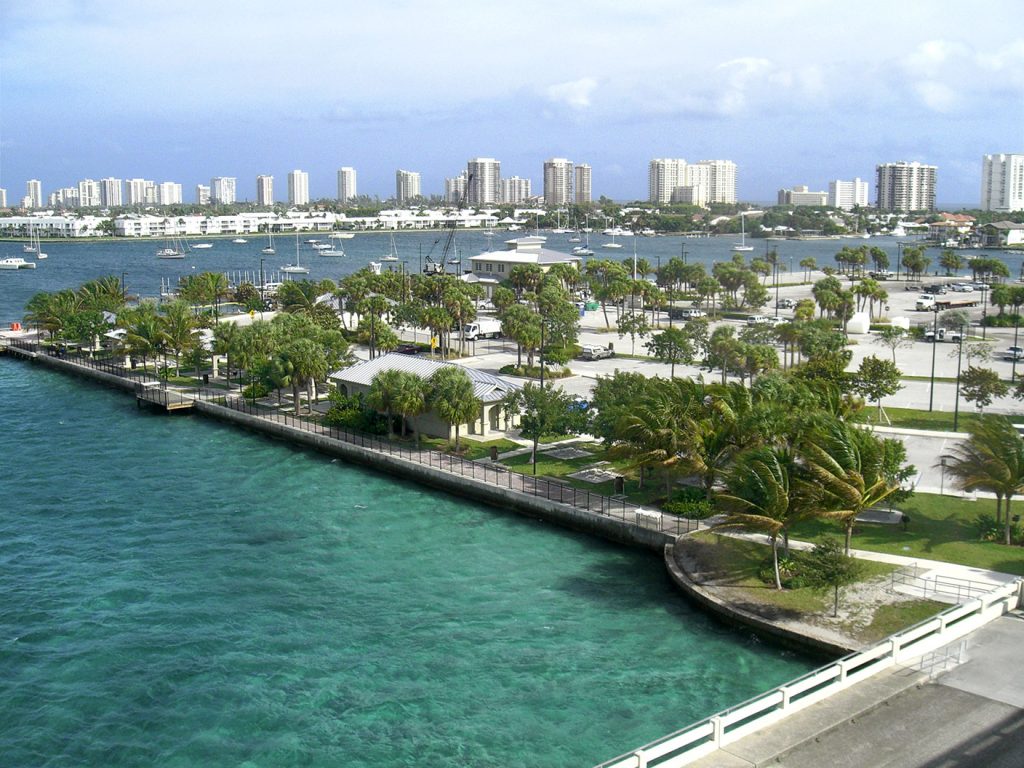 Getting there: I booked a ticket from Miami to West Palm Beach on the sleek Brightline (soon to be renamed Virgin Trains USA). Designed by the revered firms Skidmore, Owings, and Merrill and The Rockwell Group, the train offered a clean, serene experience—with a complimentary hummus snack. The journey from Miami takes a little over an hour.

Word to the wise: I’ve often watched snorkelers sitting on the sand, struggling to put on their fins. To each his own, but I found it easier to do this in the water, after one’s fins—and feet—get slick and slippery.

Safety first: Know your swimming abilities—and limitations—before you set foot in the water. Snorkel with a friend, if possible. You’ll also need a red-and-white diver’s flag, available at dive shops nearby. According to the Palm Beach County Parks and Recreation Department, the best time to snorkel is no more than two hours before the slack tide. Not only is it crucial to avoid low tide when the water is murky and the visibility low, but it’s also imperative to avoid the boater channel beyond the Snorkel Trail, where the water is deeper.

Look, but don’t touch: It might be tempting to prod sea creatures to get better photos, but resist the urge. Don’t feed the fish either, and don’t take any home for your aquarium. Use a frog kick (not a flutter kick) to avoid churning up sediment, and avoid putting your feet down so you won’t step on coral or disturb marine life that makes its home on the ocean floor.

Find your next home in Florida today.